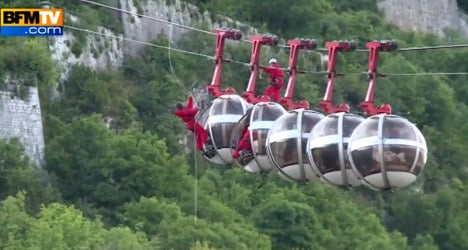 Rescuers pull 37 people from five cable cars or 'bubbles" that became blocked above the city of Grenoble in the French Alps. Photo: Screengrab BFMTV

One of many people’s worst fears was realised for 37 people in the French Alps city of Grenoble on Sunday when the cable cars they were in became blocked.

The four cars or bubbles (Les Bulles) as they are known were transporting 37 people from the centre up to the neighbourhood of Bastille at around 7pm when they were derailed by a sudden, violent gust of wind.

Emergency services were called and a specialist rescue team was dispatched to get the passengers out.

Some of those blocked had to endure the frightening experience of being airlifted from the cabins by helicopter while others had to abseil down, as the video below from BFM TV shows.

Those caught up in the frightening experience spoke of their fears that the cables would break before they were rescued.

“We were a little scared, but it all went quite fast,” one of the blocked passengers named Christian told BFM TV. “We just thought, will the cables hold? Or are we going to end up on the ground?”

In the end it took three hours to evacuate all the passengers from the cable cars. Thankfully no one was hurt, but it was an evening those involved are unlikely to forget.

"Yes, we won't forget it for a long time. It was scary. It's really not nice to have be airlifted out of a cable car," one passenger told France Info TV.

(Video from BFMTV is in French)

It's obviously not the first time passengers have had to endure being stuck in a cable car in the French Alps. In May last year The Local reported how hundreds of people were left hanging after a cable car broke down and caught fire in the Mont Blanc range.