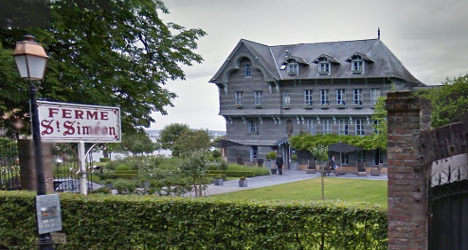 Wealthy Americans were victims of a Hollywood-like robbery at a posh French hotel. Photo: Screengrab/Google

The frightening robbery, which comes as France's holiday season is about to get into full swing, took place at the five-star Ferme Saint-Siméon hotel in Normandy on Saturday night.

After cutting off the electricity at a high-end hotel in Normandy, at least three masked robbers burst into the room, where a weathly American couple were staying and sprayed them with tear gas, French magazine Le Point reported.

One of the robbers then used wire cutters to snip the ring off the woman's finger. Moments later the assailants escaped from the hotel, leaving the retired couple shaken, with their eyes stinging, but otherwise not seriously hurt.

Police believe the robbers had been following the victims from the nearby chic Normandy resort of Deauville, which gave them the time to meticulously plan the heist. The robbery happened after the couple had returned to Ferme Saint-Siméon from dinner in a restaurant.

A spokeswoman for the hotel's management, who declined to be named, said the establishment has never had anything like this happen before and the attack has prompted a tightening of security measures.

"All of our security procedures were followed as they were supposed to and we worked closely with the police," the spokeswoman said. "Everything is underway, everything is in their hands."

She declined to provide any further information about the case, including whether the couple had returned to the United States.

This robbery comes as tourist season kicks into high gear in France and after the government has announced new efforts for keeping tourists safe. Paris recently rolled out a new security plan that aimed to reinforce patrols and policing efforts at the capital's most popular landmarks.

France has been plagued by a series of high-profile thievery in recent years. Crooks have pulled off some amazing jewelry heists in the south of France and pickpockets became so common at the Louvre art museum that workers went on strike.

There was also the shocking case of a busload of Chinese visitors, freshly arrived in the capital, who were relieved of their cash and valuables by crooks. That case became a tipping point for local authorities, who launched a crackdown on crimes against tourists.