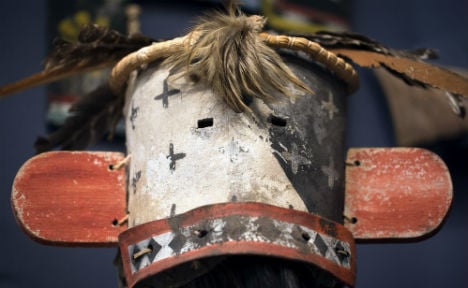 Auction house Eve defended the sale, saying that "no American law has been violated".

It added that the sale had been cleared on June 26 by a Paris court after a complaint filed by tribal peoples' advocacy group Survival International and members of the Hopi tribe.

The US embassy launched a last-minute appeal just before the sale of what it said were "priceless Native American objects, including sacred items".

"Native American tribal representatives deserve the opportunity to examine objects of possible concern before they are offered for sale so that they may investigate their provenance and determine whether the tribes may have a claim to recover the items," the embassy said.

"The sale of a sacred object cannot be dismissed with the wave of a hand as a mere commercial transaction," it said.

Attempts to block a similar auction of Hopi masks last year failed despite a high-profile campaign that included the US ambassador to France and actor Robert Redford.

A French court turned down the request for the injunction saying there were no grounds to halt the sale because the items were acquired legally by a French collector during a 30-year residence in the United States.

The sale had outraged members of the Hopi tribe who said the items were blessed spirits.