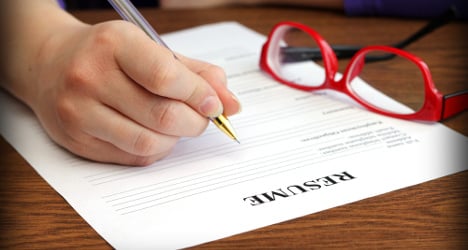 Eight years ago, France seemed to be ahead of the curve when it passed a new anti-discrimination law. From then on, it ruled, anyone applying for a job at a firm with 50 or more staff would have to submit his CV anonymously.

In practice, this would mean omitting information such as the name, ethnic origins, age and gender of the candidate.

The new law had plenty of fans. In a 2004 report entitled ‘Businesses with French colours’, insurance group AXA, had pushed for the reform, claiming it would help prevent discrimination in the workplace.

“The purpose of this kind of CV is to guarantee transparency and fairness in the recruitment process,” Jessica Ip, a specialist in employment law told The Local.

“It prevents companies from being influenced by certain factors which could bring them to put aside certain candidates, based on criteria like name, age or origin which are not related to the requirement for the position,” said Ip, from Triplet & Associés.

Yet, to date, the law has not once been implemented, but it has not been forgotten.

Last week, various supporters – including the anti-discrimination association La Maison des Potes -Maison de l’égalité, the political organization MoDem Sciences Po, and law student David Van der Vlist – raised the issue with France’s Conseil d’Etat (the Council of State). And the Conseil has finally agreed to rule on whether the law should be adopted.

'Hollande promised to apply the law'

Samuel Thomas, President of the Maison des Potes blames France's Socialist government for the non-implementation of the law.

"François Hollande promised us, during his presidential campaign, that he would apply the anonymous CV," he told AFP. “But since he’s arrived in power, we’ve been talking at cross purposes. Now we are using strong-arm tactics.”

According to Ip, however, there are many reasons why companies aren’t insisting on anonymous CVs.

One of the main flaws, she says, is that information such as age and origin can often be guessed at from other details in a CV.

“For example, the age can be guessed from the [number of] years the candidate took to obtain a degree or certificate – or from their experience.”

In the case of French CVs, the gender of the candidate can be deduced from the masculine and feminine forms of job titles such as “assistant” and “assistante” (assistant). And the candidate’s origins can sometimes be revealed by the languages he or she speaks.

As for ethnic origins and age, these are likely to be revealed in the next all-important step in the recruitment process: the interview.

“Even though an impression is made based on the skills and experience of the candidate, the employer would still have to meet them before offering the job,” says Ip.

In any case, she points out, hiding someone’s ethnic origin may prevent the candidate from standing out from the crowd in a positive way.

“It could suppress the cultural wealth of the candidate or the fact that someone is completely bilingual, which could help them in the selection process.”

Ironically, she adds, the anonymous CV can actually be a handicap when it comes to positive discrimination.

“According to studies, this type of CV discriminates against candidates with an immigrant's background or who live in sensitive urban areas.”

Indeed, one such study conducted between November 2009 and November 2010 by the Centre de Recherches en Economie et Statistiques (CREST) found that candidates who sent in a normal CV had a one in ten chance of being invited for interview – compared with just one in 22 for those who submitted anonymous CVs.

“Employers are more tolerant about failures on a CV when they know about the origin of the candidate,” says Ip. “However, if you see an anonymous CV that is not very well written, for instance, you are more likely just to put it aside.”

The Conseil d'Etat must now decide whether the government should adopt the decree or strike the law off the statute books. The decision is expected in the next six months.