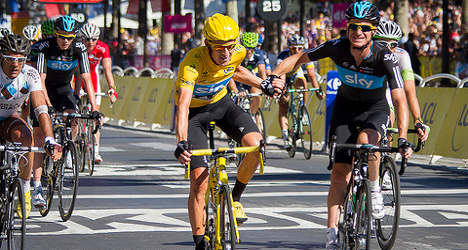 Bradley Wiggins, seen here crossing the line in 2012, will not be racing at this year's Tour de France after being dropped by his team. Photo: AFP

Former winner Bradley Wiggins was not included in the Sky team announced Friday for this year's Tour de France.

Wiggins, who won the race in 2012 — the same year he took Olympic time-trial gold — had long been resigned to being omitted from a team now built around Chris Froome, last year's Tour de France winner, and Sky boss Dave Brailsford confirmed his omission when unveiling his squad.

"It was a very tough decision," said Brailsford. "Bradley's been a great,champion, is a great champion — he's been fundamental to the growth of cycling in this country.

"But my job is to look at the best probabilities to try to win, to picture somebody on that podium with the yellow jersey on the Champs Elysees and work back from there.

"You look at the riders you've got and think who's the best placed to try and win, then you build a team based on evidence, based on logic — you try to take the emotion out of it.

"A star team will always beat a team of stars. I think that's really important."

Earlier this month, he suffered a thigh injury following a crash during the Tour of Switzerland, having missed last year's Tour due to a combination of a chest infection and a knee problem."

But Brailsford was adamant Wiggins, who has won seven Olympic medals including four golds, had a future with Sky.

"On this occasion, Bradley will miss out," he said. "But it's one race, there's still the future and there's a lot more racing in Bradley."

Wiggins, who in winning the race two years ago became Britain's first Tour de France champion, is now expected to turn his attention to competing at next month's Commonwealth Games in Glasgow.

England's Commonwealth Games cycling coach Shane Sutton was delighted to have Wiggins on board.

"His addition will be a real morale boost to the rest of the track squad," said Sutton in a Commonwealth Games England media release. "The decision of who will ride what event will be made nearer the time."

"Team Sky returns to the Tour de France with the reigning champion and we are looking to win the yellow jersey for the third time in three years and a second consecutive time for Chris Froome," said Brailsford.

"We know how hard it is to win this race and that it takes a totally focused and carefully constructed team, with the right blend of riders, to give us the best chance of victory.

"Each rider has been selected to play a specific role which will involve total sacrifice and commitment to the team's ambition of reaching the Champs Elysees in yellow."

Froome has won both the Tour of Oman and Tour de Romandie this season. He also led the Criterium du Dauphine until, a day after crashing on the sixth stage, he was overtaken and eventually finished the race in 12th place.

Porte helped Froome win last year's Tour and, together with the likes of Loped, Kiryienka, Zandio and Neve will be expected to play a key role on the steep climbing sections of the route.

Meanwhile Eisel and Pate are expected to come into their own in aiding Froome on the flatter stages.

The 21-stage race begins on July 5 in Leeds, northern England and will conclude on July 27th in Paris.