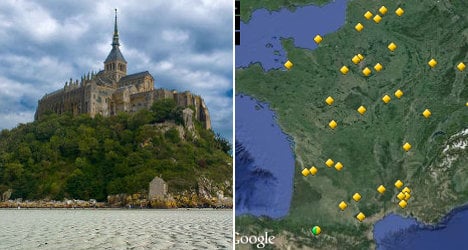 Everyone knows Mont Saint-Michel but what about some of France's more unknown Unesco World Heritage sites? Photo: AFP/Unesco

France is celebrating having two new additions to its growing list of Unesco World Heritage sites.

The historic vineyards and wine cellars of the Champagne region, where the world's most famous sparkling wines are produced, as well as Burgundy vineyards were listed as a World Heritage site by UNESCO on Saturday.

The two new additions brings the total of French heritage sites up to 41, still three behind Spain (44) and 10 behind Italy (51).

After taking a look at the Unesco-protected places France already has, we realized many of them might be unfamiliar to those with a casual interest in history.

Sure everybody’s at least heard of Mont Saint-Michel, the Palace of Versailles and the banks of the River Seine in Paris. But what about the prehistoric pile dwellings in the Alps? We didn’t think so.

So here are ten sites, that for most of France's 83 million annual tourists will be well off the beaten track. How many have you visited or even heard of?

Top ten Unesco sites in France you won't have heard of SEE ALSO: French Unesco sites you have to see before they sink With another heatwave approaching, you might be wondering how you can still have fun while avoiding the heat. Here are some places to visit that promise not to be too sweltering:

Go to the beach in Brittany or Normandy

France’s west coast is notorious for getting lots of rain throughout the year, but it is also known for moderate summers that don’t get too hot.

If you are looking for windy shorelines and temperate climates, Brittany and Normandy have the best beaches for you. In Brittany, temperatures in the summer typically stay around 25C.

Go surfing off of Brittany’s largest island Belle-Île-en-Mer or sunbathe in Saint-Malo. For Normandy, consider Le Touquet in the Pas-de-Calais département – escape the heat by walking along the cliffs at the nearby Parc naturel régional des caps et marais d’Opale.

Go hiking in the Alps

The Alps are not just for winter sports.

Well-connected by train, you can easily take a trip to the mountains to enjoy the cooler temperatures, mountain breezes and lovely views filled with colourful wildflowers.

As well as hiking, you can also enjoy rafting or biking. If you’re not as sporty, you can still enjoy the mountaintop by taking the year-round ski lift up the mountain.

The pretty town of Chamonix is also well worth a visit.

Will we be able to get to Chamonix this coming summer? I kinda miss the nights out there, the hikes, the crisp and thin air of the Alps, such an inspiring place. Now we live from the archive remembering those moments of the past that once we gave for granted. pic.twitter.com/LgzBGibvSa

Visit the prehistoric caves in Dordogne

Down in southern France temperatures do get hotter in the summer, but there are still plenty of cool options for the scorching days.

Dordogne is home to several prehistoric caves, which in summer are a great place to escape the heat. You can also see the reconstruction of the original Lascaux cave, known for its cave art and referred to as the ‘sistine chapel of prehistory’ with some of the earliest known artworks created by humanity.

In the Vézére Valley several of the caves have made the UNESCO list of World Heritage sites.

The cave of Lascaux is a system of caves in Dordogne (France) where they have discovered significant samples of the cave and paleolithic art, dated 17,000 or 18,600 years ago (Magdalenian period) according to the analysis of a rod of reindeer antler. pic.twitter.com/MvzCdJ0uuM

Caves in general are a good bet on a hot day – if you go to the Roquefort caves in Ariège it’s nice and cool and you can witness the famous Roquefort cheese maturing in the natural cave system.

Famous for having the coldest recorded temperature in France, Mouthe is located in the Doubs département, which is in Eastern France along the Jura mountains.

The reason Mouthe stays so cold is because of its altitude – it is at 930m above sea level. That makes for some bracing winters, but it’s also a great place to visit during a heatwave.

Enjoy the village, go hiking in the surrounding countryside, or take a day trip into Switzerland which is just over the border.

READ MORE: Why is Mouthe the ‘coldest village in France’?

Today is the start of #Winter ❄️⛄️- December 21, 2018- March 20, 2019! France has a generally temperate climate, but some areas have extreme winter weather. The coldest recorded temperature was in Mouthe, in the Jura Mountains, where temps dropped to an icy-41.1 °F in 1985 pic.twitter.com/ZlvR760nE1

Float on the lake in Annecy

Known as the “Venice of the Alps,” Annecy is located in the mountains, so it also has a higher elevation, which helps keep it comparatively cooler in the summer months.

Annecy is mostly known for its sparkling blue lake that is clean enough to swim in – the water typically stays at around 22 to 24C – but it also has a highly picturesque town centre and the local vin jaune is worth sampling.

Visit the kingdom of the dead

If you’re in Paris and don’t have the time or the funds for a trip out of the city, there are still cooler places to go.

The city’s museums are often air conditioned while the churches offer cool indoor spaces, but for something a little different why not visit the Catacombes?

The temperature in the network of limestone passages underneath Paris stays at around 14C all year round – considerably cooler than the city in summer. There’s also the ‘chills’ imparted by the inhabitants of the Catacombes – thousands of skeletons dug up from the city’s cemeteries and arranged into interesting patterns.

The Catacombes also provide a fascinating snapshot of the history of Paris.

READ MORE: Are these the 10 best swimming pools in Paris?