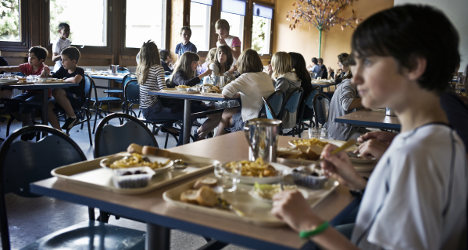 In order to save money in the heavily indebted town of Pontet in southern France, the far-right National Front mayor has pushed through a plan that forces the city’s least well off students to start paying for lunch at school.

It’s part of Mayor Joris Hébrard’s (see photo below) plan to chip away at the €50 million debt the town has wracked up, but it’s outraged an opposition UMP councillor who points out the free lunches only cost the city €30,000 per year, or just 0.05 percent of the town’s €47 million annual budget.

The controversy has also blown up because one of Hébrard’s first moves when he entered office this spring was to set his monthly salary at roughly €3,000, or €1,000 higher than his predecessor. He was among a string of 11 National Front mayors swept into office in France's local elections in March. After being bombarded by the press Hébrard apparently wasn't available for interview on Thursday, but his Chief of Staff Xavier Magnin told The Local the controversy was being manufactured by an unscrupulous media.

“They (local residents) are not like you, that’s to say they aren’t talking to us about the mayor’s salary. They say ‘Bravo Mr. Mayor. We’re fed up that it’s always the same ones who take advantage,’” Magnin said. “We took a look at the files of people getting free lunches and many of them were doctored with false attestations. People are fed up with people cheating.”

Magnin added the mayor has set about putting the town’s fiscal house in order by making a succession of small cuts, which he believes will add up to a significant reduction in spending. And he doesn’t think the new price of the meals is an excessive financial burden.

“Zero euros it’s not expensive for a meal,” Magin said. “€1.50, it’s not too expensive either in the school cafeteria.”

However a member of the opposition centre-right UMP party pointed out the Mayor’s pay raise could have bought quite a few meals.

“Sir, you have increased your salary by 44 percent, or a little over €1,000 per month, that represents more than 600 meals per month for the poor children of Pontet,” Councillor Claude Toutain said on Wednesday before the vote to approve the mayor’s policy.

Ending the free meals has also drawn the ire of a collective of six rights groups, including SOS Racism, which issued the following harsh words: “Beyond being a racist and anti-Semitic party, the National Front has just proven once again its will to create a society of discrimination and contrary to the ideas of equality.”

Interestingly, what happens in France’s school cafeteria’s has been of high interest to the National Front. Around the March elections party leader Marine Le Pen noted its members would end the serving of non-pork options in cafeterias.

The uproar about the meals has become a national news story in a country where some have cheered on and others been appalled by the string of controversial policies of the new far-right mayors.

Here is a running tally of some of the other controversies kicked up so far by the new far-right mayors.

No anti-slavery ceremony: The National Front mayor of Villers-Cotterêts in Northern France riled up local activists when he announced the town would not hold a commemoration for the abolition of slavery. Mayor Franck Briffault rejected the “continual self-inflicted guilt” of the event which has been held every year since 2007.

Mayors get pay hikes: One of the first orders of business for two National Front mayors in the south of France was to give themselves a pay rise. Mayor Philippe de La Grange in the town of Luc en Provence is paying himself €2,404.42 a month, which is about 15 percent more than his predecessor. The mayor of Coglin, Marc-Etienne Lansade, also saw fit to bump his pay by nearly 15 percent.

Mosque opposition: Muslims in two National Front-led towns are incensed by their local mayor’s efforts to quash two religious projects. Mayor Cyril Nauth in Parisian suburb Mantes-La-Ville has declared himself “hostile” to a planned Islamic prayer room, which was approved by his Socialist party predecessor. The mayor in the Riviera town of Fréjus, David Rachline ran on his opposition to a mosque there which is already under construction. He’s called for a referendum on the matter.

European flag disappears: The anti-EU sentiments of the National Front have also popped up in symbolic ways. On orders of Fréjus, Mayor David Rachline the gold star-adorned European flag was removed from the front of Town Hall.

Human rights group evicted: Human rights activists got the boot from their city-owned offices after new National Front mayor Steeve Briois was elected in northern France. The Hénin-Beaumont mayor said the League of Human Rights, which opposed his candidacy, had become “politicized” and thus was no longer legally entitled to public subsidies.

No halal lunches: Anger (and support) ricocheted on Twitter after National Front-backed Mayor of Béziers, Robert Ménard announced “there would be no halal meals in municipal cafeterias,” echoing a statement from party head Marine Le Pen. But it later emerged schools in Béziers don’t offer halal meals, rather it has non-pork options for Jewish and Muslim pupils.

Drops in taxes and salaries: Some mayors have also announced cuts to the local residence tax (taxe d'habitation), but have not said how they plan to make up for the lost revenue. The northern city of Hénin-Beaumont will see a 10 percent tax cut and a “vast savings plan.” Smaller cuts are on the table in Villers-Cotterêts and Beaucaire, which also saw a “symbolic” cut town in councillors’ pay.

Kids’ curfew: Under 13s will be forbidden from being outside alone at night in the town of Béziers under a municipal decree from National Front-backed Mayor Robert Ménard. The summertime prohibition targets certains areas, including higher-crime, lower-income zones referred to as “sensitive neighborhoods” in French.