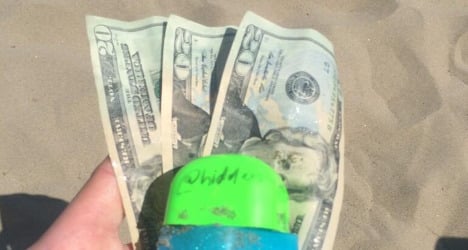 Hidden Cash will not be taking place in Paris after police banned the treasure hunt. Photo: Twitter @hiddencash

American philanthropist Jason Buzi will not be allowed to stage his quirky @Hidden Cash treasure hunt in Paris at the weekend, police said on Wednesday.

"The distribution of money in public is forbidden by French criminal law" and punishable by six months in jail and a €30,000 ($40,000) fine, police said in a letter to Buzi, a wealthy real estate investor.

The game is fairly simple. Clues about the location of the money are dished out by the hidden cash twitter account (@hiddencash), which then sparks a frenzy of people seeking the concealed dollars. The lucky finders are encouraged to tweet out a photo of themselves with their winnings.

But the Paris police recalled a similar event in the French capital in 2009, staged by a private company, that led to "public disorder" after it had to be called off at the last minute.

Hidden Cash hunts have taken place in US cities including San Francisco, Los Angeles, Las Vegas, New York, Houston and Mexico City, and the Paris edition had been set for Saturday.

Buzi and a group of anonymous friends, who have given to charity in the past, came up with the treasure hunts as something a bit more fun.

One treasure hunt has already taken place in London and another is planned in Madrid.

Earlier this month, in his first ever interview the San Francisco Bay Area investor had revealed that he and his partners would be hiding money in Paris, London and Madrid no later than the first week of July.

“We’re planning to give away a lot more money,” Jason Buzi told CNN, adding he’d already handed out up to $15,000 this spring.

Buzi has been accused by some critics of running a “twisted game masquerading as a charity”, according to website Huffington Post. Yet he’s said that’s wrong.

“This is not about money. It has always been about a fun way to bring people together and give back, and put smiles on people's faces. Nothing more, nothing less,” Buzi wrote in a manifesto explaining his logic and responding to critics. “Those who look for cynical or selfish motives behind every action, would do well to search their own hearts.”

Are the French police right to ban Hidden Cash?