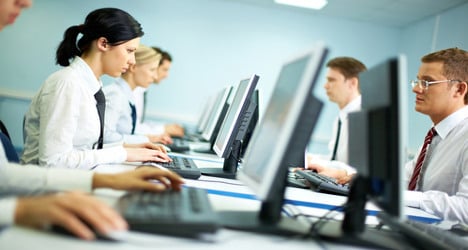 So what if the French put in the second least amount of hours in Europe? Photo: Office workers.

A new study from a management-friendly research firm has declared France is second only to Finland  in Europe when it comes to full-time employees putting in the fewest hours per year on the job.

The report from COE-Rexecode, which draws on official European Union data, indicates that in 2013 French salaried workers put in 1,661 hours per year, which is 239 hours or nearly six 40-hour working weeks fewer than the British and 186 hours less than their German counterparts.

The study also showed that the average amount of hours worked each year has decreased over the last 15 years at a higher rate in France (14.8 percent) than in any other country. In Germany annual hours worked have reduced by 8.9 percent, in Spain by 9.8 percent, Sweden by 8.5 percent and by 3.1 percent in the UK.

The report on such a politically sensitive issue was naturally snapped up by French media on Wednesday.

At first glance it sounds like the report could explain in part, why the French economy remains moribund and plagued by double digit unemployment, while its neighbours are slowly seeing some growth.

Indeed that was the line chosen by right-leaning Le Figaro, the first to publish the findings.

Le Figaro points out that while the French government has made plans to cut payroll taxes in a bid to improve competitiveness, it has made "the mistake" of failing to deal with the hidden problem of "working hours".

However, even though the data will be used as the latest ammunition to slam France’s flagship 35-hour work week, things are not that simple.

First, the COE-Rexecode study also includes figures which show French workers who aren't earning a fixed salary, for example the self-employed or freelance workers do more hours than most in most EU countries. The report says independent workers, small business owners and people in the building trades were putting in 2,372 hours per year, right behind the Germans who are doing 2,399.

When it comes to part-time workers the French actually put in more hours (993) than their German (851) and British (864) counterparts.

Accordingly when full-time and part-time workers are lumped together the French are not as far behind their neighbours – with 1,536 hours worked in 2013 compared to 1,580 in Germany and 1,637 in the UK.

It's also worth noting that, according to 2011 data from the Paris-based OECD think tank, France’s productivity is above Germany’s and close to that of the United States, which would indicate the French get a lot done when they are on the job.

And the reality is, not many people in France actually work 35-hours a week. A labour ministry report published last year revealed French workers put in an average of 39.5 hours a week in 2011, slightly behind the EU average of 40.3 hours and the 41-hour working week in Germany and 42.4 hours in the UK.

The same survey showed French middle-management worked an average of 44.1 hours a week

For business leaders the 35-hour work week has long been called a job-killer and brake on French economic growth. Yet defenders say it has created jobs and allowed France to grow humanely.

The author of the Rexecode study, Amandine Brun-Schammé, told French economic news site Challenges: “It’s not that fact of working 35 hours per week that poses a problem, rather it's the costs it brings.”

She says the reform pushed up the hourly cost of work in France by ten percent since the late 1990s. France now has some of Europe’s most expensive labour, which costs employers €35 an hour, compared to the hourly cost of British and German workers which were €21.10 and €31.70.

Brun-Schammé points out that overtime pay, which costs more than the normal hourly rate, is triggered earlier in France due to the 35-hour week and thus can cost employers more.

However, the increase in labour costs is not just explained by the shorter work week. Salaries and payroll taxes have jumped higher and faster in France than in its neighboring countries since 2000 when the 35-hour week took effect.

“From 2000 to the second quarter of 2013, labour costs in France went up 45 percent, compared to 24 percent in Germany and 40 percent on average in the eurozone,” Michel Didier, president of COE-Rexecode told Challenges last year.

In an effort to get a handle on the tax burden borne by French employers, the country has pledged to make some changes. France is going to cut €50 billion from its budget over the next several years in order to lower payroll expenses for employers, who, it is hoped, will then hire more workers.

For many of the bosses of France’s big businesses getting rid of the 35-hour week would be an equally effective measure to kickstart the economy. But some prominent French economists say doing so in the midst of an economic crisis would be disastrous.

If employees were told they had to again work 39 hours per week, as they did prior to the reforms in 2000, and got no corresponding pay increase, the subsequent cost-free boost in productivity for companies would simply dissuade them from recruiting, economist Henri Sterdyniak from the French Economic Observatory told The Local previously.

“It would mean companies wouldn’t have to hire anyone. That would have a catastrophic impact on the unemployment rate,” Sterdyniak said. “It would essentially be telling firms to use their current workers ten times more instead of hiring others."