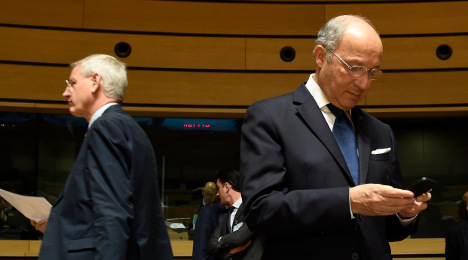 French FM Laurent Fabius (left) fires off a quick tweet, while Sweden's Carl Bildt (right) has his back turned. Fabius has been crowned the most connected foreign minister on Twitter. Photo:John Thys/
Finally France has finished above Sweden in a global rankings.
Sweden's foreign minister Carl Bildt, who last year was crowned as the most well-connected foreign minister on social media site Twitter, was dethroned by France's Laurent Fabius – better known in Twitter circles as @LaurentFabius.
The Twiplomacy barometer, produced in conjunction with heavy-hitting lobbyists Burston-Marsteller, put @CarlBildt in second following the French minister, who boasts 101,000 followers to Bildt's 300,000.
But the crown was not handed out based on the number of followers but the number of important people they are connected to. Fabius is mutually connected to 91 peers and world leaders whereas Bildt can only count on 68 mutual connections.
Being mutually connected on Twitter, the study explained, allows leaders to have direct and private conversations with one another – in 140 characters (or less) at a time.
"A number of foreign offices have used this channel to reach out to peers and other influencers to set the record straight or to coordinate their digital outreach," Twiplomacy said in a statement. "These mutual connections among foreign ministers allow for private conversations via direct messages on Twitter.
“It is interesting to see how foreign ministries have created large digital networks on Twitter where not every tweet is approved by lawyers and press officers. Corporations and CEOs can learn a lot from politicians on Twitter," said Jeremy Galbraith, CEO of Burson-Marsteller Europe, Middle East and Africa and Global Chief Strategy Officer.
Bildt, who told The Local in January that he had "been working with internet issues since the internet started", is an active Twitter user and tweets regularly in English, unlike Fabius.
When it came to the most followed world leaders, US President Barack Obama was far and away the number one with almost 44 million followers. Pope Francis came in a distant second with 14 million followers. Indonesia's President S. B. Yudhoyono was third with 5 million.
French President François Hollande, not renowned for his tweets, has only 649,000 followers. To put this into perspective, 20-year-old Justin Bieber has 52.5 million followers.
Notably the personal Twitter account of French Prime Minister @ManuelValls has been dormant since the elections on 9 May 2012.
Twiplomacy also dished out social media cred to the prime minister of Belgium for chatting with followers on Twitter, and even discussing how he likes his french fries.
It pointed to the Finnish Prime Minister @AlexStubb, as an example of a thorough Twitter user. Stubb shares his athletic exploits, has a penchant for selfies, and even co-authored an e-book in Finnish about what to do on Twitter and some of his tweets were even put to music.
Belgian Foreign Minister Didier Reynders, however, was called out on experimenting outside of his mother tongue, after his first tweet in English said "i'm coming on twitter".