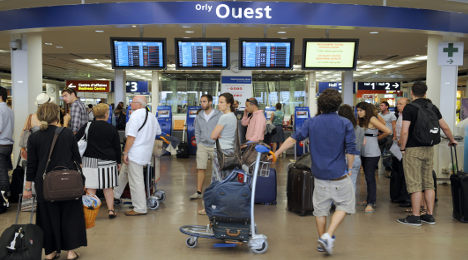 French air traffic controllers called off their planned six-day strike after talks with the government on Wednesday evening. It comes after two days of travel chaos across Europe that saw hundreds of flights cancelled or delayed.

The strike, which stranded hundreds of passengers, was called off after the government recognized the "importance of investment in the sector," said the UNSA-ICNA union which launched the protest.

Earlier in the day union rep Christophe Merlin had told Le Parisien newspaper: "As soon as we get guarantees we will lift the strike notice."

Those guarantees were apparently given in lengthy talks on Wednesday, after which the union told workers to return to work.

"We explained the seriousness and urgency of the situation," the union said in a statement. "Progress was made."

French aviation authorities the DGAC said air traffic will return to normal on Thursday after two days in which it asked airlines to cancel 20 percent of their flights to ease pressure.

Air France's budget airline Hop! had tocancel 184 flights over Tuesday and Wednesday and said the strike "had cost the firm several millions of euros, during a time of restructuring".

"It was real hard blow," Hop! said in a statement on Thursday.

The misery for travellers continued on Wednesday as a strike by French air traffic controllers entered its second day. Hundreds of flights from Britain and Ireland to France and Spain were cancelled due to the walk-out and scores of others were delayed. Passengers faced problems in airports all around Europe.

On Thursday afternoon, after talks were ongoing between the UNSA-ICNA union and the government, French aviation authorities DGAC said there would be a "clear improvement" in the situation on Thursday.

DGAC said around 95 percent of flights would be operating, compared to around three-quarters of services on Tuesday and Wednesday.

"As soon as we get guarantees we will lift the strike notice," union spokesman Christophe Merlin told Le Parisien newspaper.

The work stoppage comes at the height of the tourist season in a nation that attracts more foreign visitors than any other country.

The country's civil aviation watchdog said about one in five flights going to and from several big cities in southern France, or taking off from Paris to the south, Spain, Portugal, Morocco, Tunisia and Algeria, were cancelled and passengers were experiencing delays on other services.

The watchdog said some 20 percent of flights to and from the same airports would be cancelled on Wednesday, with the strike set to continue until Sunday, warning passengers not to go to the airport "without having been guaranteed that their flight is maintained".

Ryanair, which was forced to cancel around 200 flights Tuesday, slammed the strike and "called on the EU Commission to remove the right to strike from Europe's air traffic controllers, who are once more attempting to blackmail ordinary consumers with strikes."

SEE ALSO: 'Take away their right to strike', Ryanair tells The Local

The budget airline said it expects the situation to get worse on Wednesday, and expects to cancel around 250 flights with other services delayed by up to five hours.

"The slot delays caused by the French/Belgian Air Traffic Control (ATC) strikes today are continuing to cause severe disruptions for our customers. ATC delays of up to five hours are now being allocated to Ryanair flights operating to/from France, and also flying over France," the company said in a statement.

"We expect that these delays will continue to build through the morning as the backlog of delayed flights rises. In order to minimize disruptions on the rest of our network Ryanair has been forced regrettably to cancel approximately 15 percent of Ryanair’s total schedule of over 1,600 flights today.

"We expect these disruptions to flights to/from France, Belgium and Spain will worsen this morning as all airline schedules are heavily disrupted by this unnecessary and regrettable French ATC strike.

"All customers affected by these cancellations will be offered a choice of reaccommodation on later flights or full refunds."

EasyJet confirmed on Wednesday that it has had to cancel 150 flights because of the air traffic control strike.

“EasyJet can confirm that it will cancel 150 flights, of the 1400 scheduled to operate today, due to the French air traffic control strike. As 65 percent of easyJet’s network travels through French air space we advise all passengers travelling today to be prepared for delays and to check the status of their flight on www.easyJet.com or via the easyJet flight tracker," the airline said in a statement.

The airline is advising passengers affected by cancellations not to travel to the airport today, as "accomodation is scarce".

British Airways said eight flights had been affected on Tuesday. For its part Air France says flights to and from the following airports will be affected: Biarritz, Bordeaux, Clermont-Ferrand, Lyon, Marseille, Montpellier, Nice, Pau, Toulon and Toulouse as well as flights from Paris airports to Spain, Portugal, Morocco, Tunisia and Algeria.

@TheLocalFrance Don't forget Gatwick, delay of flight to Spain today was 11hrs as plane had to fly through french air space #typicalfrench

"Unions bent on stopping progress are putting at risk the hard-earned vacations of millions of travellers, and from the public's perspective, the timing of the strike could even be regarded as malicious," the group's head Tony Tyler said in a statement.

"In addition to vacationers, business people undertaking important trips and those awaiting urgent shipments will all face hassles and uncertain waits as flights are cancelled, delayed or diverted around a major portion of European airspace."

Not all air traffic controllers are striking, but those stopping work are protesting against what they say is a lack of sufficient funding allocated for their sector, which they say is in dire need of modernization.

They want airport fees for airlines to increase by ten percent, companies want them to go down, and the government is caught in between.

The SNCTA, the country's biggest air traffic control union, decided not to go on strike following last-ditch negotiations with the government but has echoed mounting concerns that French air navigation tools are becoming dangerously obsolete.

The system used in the country to enhance radar monitoring and for separation of air traffic dates back to the 1980s, and is due to be replaced by a new system.

The tools used to control air traffic are also in need of change. According to the SNCTA, for instance, all radar screens in the Aix-en-Provence control centre in southern France were recently "urgently" changed after around 20 screens suddenly went blank over the space of 18 months.