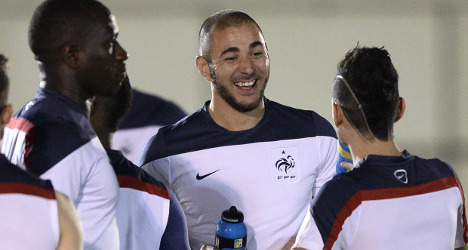 France coach Didier Deschamps has urged his team to keep their excellent start to the World Cup going when they face Ecuador at the Maracana in their final Group E game.

"We need to try to maintain everything we have done so far and finish the job," said Deschamps as France look to clinch qualification for the last 16 on Wednesday as group winners against an Ecuador side whose own place in the knockout rounds is at stake too.

"We will be up against a team who are also competing for a place in the next round so we can't take this game lightly."

France have scored a total of eight goals in their two matches to date, against Honduras and Switzerland, and their goal difference is such that even a defeat at the Maracana is unlikely to deny them a berth in the last 16.

"The level of commitment from the players has been the same as has the way we have prepared for this match," said the coach.

"We are aiming to ensure first place but that will require us to play well because we are up against a quality side.

"The objective for us is to win the match and we are taking it very seriously. Up until now we have been clinical in front of goal but with respect to Ecuador we can't think it will be easy."

Nevertheless, Deschamps is set to ring the changes for the game, including bringing in the Southampton midfielder Morgan Schneiderlin in place of the suspended Yohan Cabaye.

Other alterations to the team that thumped Switzerland 5-2 last Friday could see Bacary Sagna and Lucas Digne start in the full-back positions and Laurent Koscielny come into central defence.

"You will see tomorrow (Wednesday) what changes I will make," was all Deschamps would say, as he refused to confirm whether even Karim Benzema, scorer of three goals thus far, would start.

The France team were unable to train on the Maracana surface on the eve of the game due to the state of the pitch, so were forced to do so several kilometres away at Rio de Janeiro's Olympic Stadium.

As a result, goalkeeper and captain Hugo Lloris was spared the journey back to the Maracana to speak to the media, leaving duties to the banned Cabaye.

The Paris Saint-Germain player said Schneiderlin, whose only cap to date came in the 8-0 friendly win over Jamaica earlier this month, was ideally suited to take his place.

"Morgan is a very good player. What he is doing in England shows he has quality," said Cabaye of Schneiderlin, who was called into the squad to replace the injured Clement Grenier.

"He is good technically, he keeps the ball, scores goals and is a box-to-box player. He has shown a lot of quality since the start of our preparation for the tournament and now he is ready."

With Ecuador favouring a direct approach, Wednesday's game could well be a high-scoring encounter.

Wingers Antonio Valencia and Jefferson Montero will provide the ammunition for Felipe Caicedo and the in-form Enner Valencia, who has three goals so far.

Reinaldo Rueda's Ecuador only need to match the Swiss result in the other game to reach the last 16 for the first time since Germany in 2006.

Enner Valencia said Ecuador were wary of the threat posed by France's attack, led by Karim Benzema, who also has three goals to his name.

"They're going to be very difficult opponents, we know France's strengths but we're going to have to take care if we want to hurt them," said Enner Valencia, 24, whose brace secured a hard-fought 2-1 win over Honduras in Curitiba last Friday.

The veteran Edison Mendez added: "They have played very well in their two matches so far, collectively they are doing well and they are getting into the box a lot, so it is going to be a totally different game for us.

"But to know that we have a chance of going through to the last 16 means that we will take to the field feeling confident and strong."

Should Honduras win and Ecuador lose, the calculators would need to come out to work out who joins France in the last 16.