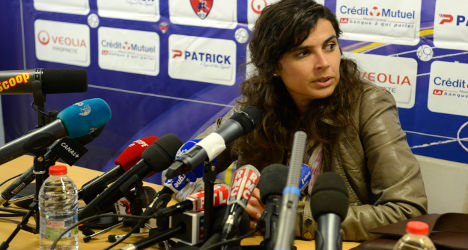 The first woman to be hired to coach a major French men's football team has stepped down suddenly. Photo: Jean-Philippe Ksiazek/AFP

Portugal's Helena Costa said on Tuesday she had decided against taking up the coaching position at French club Clermont for "purely personal" reasons.

The 36-year-old made global headlines as the first woman to take charge of a men's professional team in a leading European nation after being named in May to coach Clermont, who play in France's second tier.

But club president Claude Michy took everyone aback on Monday with the sudden announcement that the ground-breaking deal had fallen through.

Costa appeared alongside Michy at a press conference at the club's Stade Gabriel Montpied on Tuesday, but would only say that personal considerations had been behind her decision to step away from the job.

She said that she had explained her decision in private to Michy and that she would have no further comments to make.

"She simply said: 'I am leaving', and we were not able to get her to change her mind. She takes her secret with her. "She had developed a problem of confidence in the situation, but I have no idea what it was that caused this.

"Now we look again to the future. The club has a solid structure and we will hire another coach – male or female."

Clermont are a modest club from a city where rugby dominates, and they came 14th in Ligue 2 last season, while playing to average crowds of less than 4,000.

When announcing her appointment last month, Michy had been forced to dismiss suggestions that his move for Costa, who has a UEFA A coaching licence and a Masters degree in sports science, was a publicity stint and said that he had "chosen a coach first and foremost, not a woman".

Since then Costa has had spells coaching the women's teams of both Qatar and Iran, and was also a scout for Scottish giants Celtic.

Club president Michy said that since the news broke that Costa was no longer interested in the job, there had been 45 applicants to fill her shoes.

Players' agent Sonia Souid, who had acted as the go-between between the club and Costa in the first place, also said that she had no real idea what had gone wrong with the deal.

"It was not the same Helena Costa that stood before us a month ago," she said.

"We found ourselves up against a brick wall. She had already taken her decision," she said.

"I am very angry and sad for all the other women who could have been in her place. I am angry because it is such a selfish decision."

Souid, a former beauty queen for the Auvergne region, is one of the very few women who work as agents for male footballers.