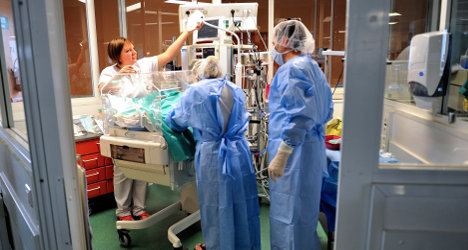 Though France budgeted €588 million in 2013 to cover the medical expenses of illegal immigrants, the actual bill hit €744 million due to a huge jump in those claiming aid, that was partly prompted by fraud, including a €13 million visa scam.

She told lawmakers that the programme’s staggering 35 percent jump in enrollment in the past two years was in part due to fraud, French daily Le Figaro reported.

“Yes, the increase (in spending) we’ve seen is linked to the large increase in the number of beneficiaries of the AME and we didn’t anticipate such a big jump,” Touraine told senators recently . “However, we have to…fight against the abuse that’s been reported.”

The AME programme was launched in 2000 and was explained to the French people as a way to fight the spread of certain illnesses in France. It’s aimed at people who’ve been in the country at least three months, who make less than the equivalent of €8,593 a year and are living in France illegally.

Among the various cases of fraud targeting this programme, France saw everything from a Chinese internet site selling phony AME benefit cards, to doctors using the system to get prescription medicine they then sold abroad, French daily Le Parisien found during its investigation.

However, one of the most shocking instances of misuse is the reported 57 cases of health tourism that has cost the government a total of €13.7 million. In those cases people with expensive to treat and life-threatening conditions allegedly manipulated the system to get care.

According to Le Parisien dozens of Georgian nationals with a rare form of tuberculosis turned up at the hospital as their visas were due to expire, making them eligible for the AME fund.

'Only nine percent of illegal immigrants have health coverage'

But these cases are rather rare. Doctors of the World told Le Parisien that only nine percent of illegal immigrants have health coverage and only two percent cite personal health as a reason for their migration.

“Those numbers show that anti-immigrant arguments, alleging they come to take advantage of European health systems, are unfounded,” the group told Le Parisien.

Tourraine said that starting from 2015 the government will have statistics that will allow it to better detect fraud. Auditors will be able to look, fund by fund, at how AME money was spent in order to determine if there was unseemly spending.

The government could also consider reinstating the €30 fee AME users used to be subject to, but which was eliminated in the early months of President François Hollande’s term in office. The year the fee was enacted saw AME beneficiaries drop by 20,000.