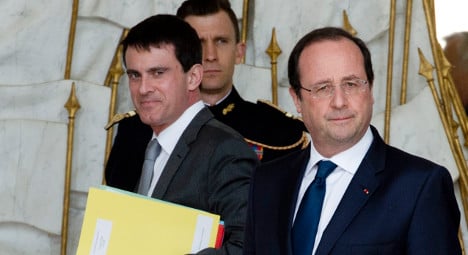 Fraçois Hollande and his PM Manuel Valls have wion praise for their tough stance on rail strikers and General Electric's bid for Alstom. Photo: Alain Jocard/AFP

Long accused of being dithering and spineless, French President Francois Hollande's government won praise on Monday for a rare show of backbone in taking a stake in strategic industrial jewel Alstom.

It was the second time this month the government had defied its reputation for weakness, after new Prime Minister Manuel Valls refused to give in to rail workers who launched the biggest strike since Hollande took office.

But with the lowest popularity rating of any modern French leader, Hollande is a long way from turning around public opinion.

Hollande took charge personally of the Alstom case, which saw France on Sunday clinch a deal to become the main shareholder in the company, paving the way for an alliance with US giant General Electric.

"The state set the framework in deciding how this operation – an important one for the country's industrial policy – would take place," he said.

The deal will see the French state take a controlling stake in power-to-rail group Alstom and pursue a €12.35 billion ($16.8 billion) deal with GE for its purchase of the group's struggling energy businesses.

Hollande's government was initially opposed to GE's bid and encouraged Germany's Siemens to put in a rival offer, but turned around and backed the US giant after it sweetened its offer.

GE has promised to give the government a veto over sensitive nuclear energy technology and to strengthen Alstom's transportation business, which makes the French TGV high-speed trains.

The head of Hollande's Socialist Party, Jean-Christophe Cambadelis, said the government had shown its "strategic presence" in the Alstom deal.

"This is an alliance that will allow us to save jobs…. and preserve decision-making," he told i-Tele.

France's newspaper of record, Le Monde, said the deal showed that "when the state wants to, it can" act to protect national interests.

"There can be no doubt, the state obtained concessions from GE," it said in an editorial.

But it also warned that the Alstom deal would do little to reassure wary foreign investors.

"The partial nationalisation of Alstom brings nothing, it was purely political," Le Monde said, adding that the deal will "even further dampen foreign investors who prefer to avoid France and its interventionist state".

Montebourg played a key role in securing the Alstom deal and Valls was praised last week for standing up to rail workers who sparked travel chaos with the longest strike in years.

The strike, which is continuing in a few areas, was prompted by a reform aimed at tackling the rail sector's soaring debt but which unions said would lead to job losses.

Valls pushed ahead with presenting the reform to parliament despite the crippling industrial action, convincing some unions to drop their opposition with a few concessions.

"Very quickly convinced of the unpopularity of the strike in public opinion, Valls moved with political dexterity," business newspaper Les Echos wrote at the weekend.

"He is emerging from the conflict with an image of strength what will no doubt be useful on other issues," it said.

GE
US giant GE to pay France €50 million after creating just 25 jobs out of 1,000
Url copied to clipboard!