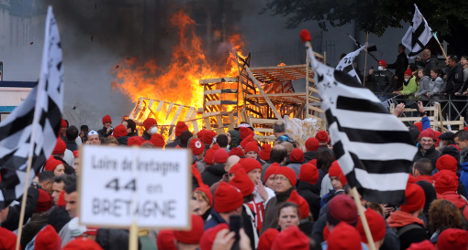 France has an alternative to its controversial 'ecotax'. Photo: Fred Tanneau/AFP

French leaders have definitively abandoned the ‘ecotax’ on heavy goods vehicles and will instead impose a far less ambitious and contentious tax plan dubed a "truck tolls", it was revealed on Monday.

The news came after the government leaked details of the new plan to the French press, which seized the moment to declare the death of the ecotax, which had provoked violent protests last year.

Here's the key points about the new "transit/truck toll":

How much will it cost?: Lorries that use certain French roads (see map below) will have to pay €0.13 per kilometre, though the amount could be less for some trips. The charge is expected to bring in up to €560 million per year for road and public transportation projects. That is nearly a third less than authorities would have have been collected under the ecotax.

Which roads and vehicles will it apply to?: The tax only will apply to vehicles weighing 3.5 tonnes or more and solely when those vehicles drive on a stretch of the 4,000 kilometres of roads subject to the new toll. Roads in Brittany will not be included on the list of taxed highways. Circus, agricultural and milk collection vehicles will be exempt. In contrast the ecotax would have been applied to 15,000 kilometres of roads.

How is it calculated?: Whereas the ecotax would have been applied by automated portals (portiques) that photographed license plates, on-board GPS trackers will enforce the new lorry toll. The GPS device will automatically tally the number of kilometres lorries are to be taxed for. Authorities have not said what will become of the portals that were constructed for the ecotax, many of which have been destroyed by protesters.

When?: The government plans to roll out the tax starting January 1st 2015, though the system should be up and running for three months prior in order to smooth over any bugs. The government, however, hasn’t set a deadline yet for signing up to the new system.

Why?: Similar to the ecotax, this plan seeks to push heavy goods vehicles towards using greener methods to move their products around France. But it also is intended to force companies to pay for the roads they have used as they seek to avoid the costly tolls on some of France’s main motorways. The money collected will go to major transit projects, many of which have been delayed by the battle over the ecotax.

The new proposal has left few happy with both ecologists, who had backed the former ecotax, and the Bonnets Rouges – the Brittany-based movement which successfully brought down the scheme, both voicing disapproval.

"This will mean an end to the financing of dozens of public transportation projects," Matthieu Orphelin, spokesman for environmental lobby group Fondation Nicolas Hulot told French daily Le Parisien. "It is the exact opposite of the France's intended energy transition plan."

Last year the French government indefinitely delayed the application of the ecotax after a violent uprising in Brittany against it, which was led by the Bonnet Rouge movement. "Courage is not obstinance, it is listening, understanding," the then Prime Minister Jean Marc-Ayrault told reporters after urgent government talks that followed clashes between police and anti-tax protesters in October 2013.

The protests led some to claim that France was on the verge of 'social explosion'.

The tax was viewed a job killing measure that would further hurt Brittany's farmers and agricultural workers. The government’s new toll system largely avoids the area, with the route between Sant-Lo and Nantes, via Rennes, being the only one in Brittany subject to the plan.