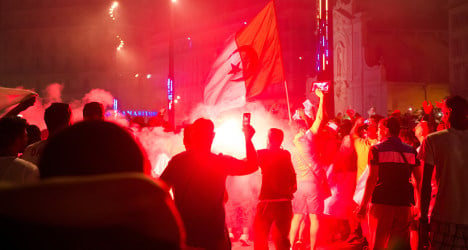 Algeria fans clashed with riot police in various towns and cities across France on Sunday night after celebrations over their World Cup victory turned ugly.

Jubilant fans spilled out on the streets after seeing the Desert Foxes or "Fennecs", as their team are known, beat South Korea 4-2 in their World Cup group match.

The win, Algeria’s first in the World Cup since 1982, has given the North African side a chance to qualify for the next round and it was celebrated with gusto with as fans descended onto the Champs Elysee in Paris, the Old Port in Marseille (see photo) and other towns and cities across the country.

While the vast majority of the partying remained good natured, by the early hours of the morning riot police had been called out as some fans went on the rampage.

In Grenoble fans torched several cars, buses and bins forcing police to fire tear gas in a bid to quell the trouble. There were similar scenes in Lyon, Lille and the town of Roubaix in the north-east of the country, where youths smashed shop windows and bus stops in the early hours of Monday morning.

It comes after police made a number of arrests after Algeria’s first World Cup match in which they lost to Belgium. That game saw the mayor of Roubaix order the centre of the town to be effectively locked down, with traffic banned and riot police out in force.

Algeria, now face Russia in their final match of their group on Thursday, knowing a win would see them qualify for the knock-out stages of the tournament.