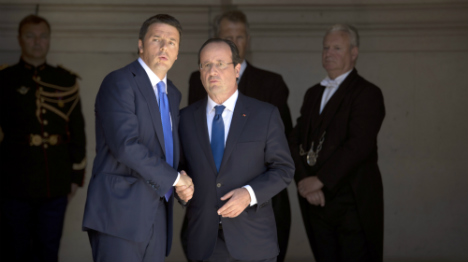 Hollande said the leaders would "respect" the tradition that the largest grouping in the European Parliament nominates a candidate to head the commission, "in this case Mr. Juncker".

Juncker has been put forward by the centre-right European People's Party, which won the most seats in a European Parliament vote last month that also saw strong gains for anti-EU parties.

Moves to hand the post of EC chief to Juncker — a long-serving Luxembourg premier and EU insider — have triggered the most bitter dispute seen in Europe since the height of the euro crisis.

The row is set to dominate the two-day summit of all 28 EU leaders starting Thursday, with Britain's Prime Minister David Cameron vowing to fight Juncker's appointment "until the end".

The British leader sees Juncker as a federalist who will not adopt reforms London says are needed in the bloc. Hollande met Saturday with Italy's popular young new Prime Minister Matteo Renzi and the leaders of Austria, Belgium, the Czech Republic, Denmark, Malta, Romania and Slovakia.

A similar mini-summit of centre-right EU leaders in Sweden this month saw some strong opposition to Juncker's appointment although German Chancellor Angela Merkel is backing him.

Hollande said the EU needs to "take into account what happened during the elections and ensure that Europe is re-oriented."

He said efforts were needed to boost economic growth and job creation, calling for greater "flexibility" on budgets — a clear reference to Berlin-backed strict rules on deficit reduction.

"We have the will to simplify Europe, to democratise it and finally to control immigration in a manner consistent with our values and principles," Hollande added.

He said the centre-left would be looking to win other posts up for grabs as the EU replaces key figures including the Council president, Eurogroup chief, foreign policy chief and European Parliament head.

Renzi has conditioned his support for Juncker on a softening in the German-inspired austerity policies that Brussels has pushed in recent years.

With Hollande politically weak, the 39-year-old Renzi is increasingly taking the front seat on the European left, opposing Merkel over austerity.

Hollande said he supported Renzi's efforts and expressed confidence in Rome as it prepares to take over the EU's rotating presidency on July 1st.

"Italy and France share the same goals of re-orienting" the European Union, he said. "The real question is what kind of Europe we want for the next five years."