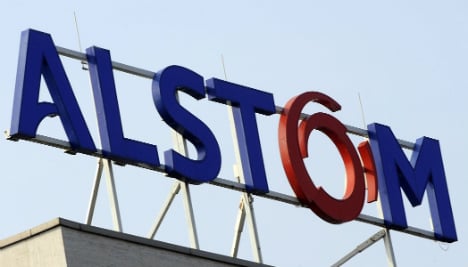 "The board of directors unanimously decided to issue a favourable opinion of GE's offer" and will begin consultations with personnel, a statement said.

The statement comes a day after the French government stepped firmly into the battle over Alstom, saying it favoured General Electric's bid, chosen over a rival joint offer from Germany's Siemens and Japan's Mitsubishi Heavy Industries.

GE boss Jeff Immelt hailed the deal, saying it was "good for France, GE and Alstom" while adding that it would not be finalised before next year.

"We look forward to working with the Alstom team to make a globally competitive power and grid enterprise," he said in a statement.

The French government announced a surprise caveat on Friday that it would take a 20 percent controlling stake to preserve French strategic interests in its industrial jewel, which it plans to do by purchasing two-thirds of the shares owned by another French group, Bouygues.

Discussions on the price were ongoing between the government and Bouygues on Saturday night after a long day of negotiations.

David Azema, who is leading the government negotiations, told AFP the two sides were close to finalising a price on Saturday night.

The French government had wanted to buy the shares at the current price, which stood at 28 euros per share on Friday, according to the latest listing of Alstom on the Paris Bourse. But Bouygues was asking for 35 euros per share.

Montebourg said the money for the purchase would be raised from the sale of government-owned shares in other companies such as Safran and Airbus. Despite the uncertainty, Alstom decided to press ahead with approving the GE bid.

It welcomed the "constructive exchanges with the French state" which allowed them to reach a deal that "not only takes into account the expectations of Alstom and its stakeholders, but also provides an adequate response to concerns expressed by the French government".

Even if the deal between the government and Bouygues is finalised, Alstom said it would still need to put the GE bid to employee representatives, and gain regulatory approval related to foreign investment rules.

Montebourg said Friday he had sent a letter of intent to Immelt laying out the terms of the alliance.

The future of Alstom has been at the centre of a transatlantic tug of war for several months after President Francois Hollande's Socialist government objected to the US giant buying the jewel of French engineering, and encouraged the rival offer by Siemens and Mitsubishi.

The German and Japanese firms improved and simplified their linked offer on Friday, increasing their valuation of Alstom's energy division to €14.6 billion ($19.9 billion), less than a day after GE had made several changes to make its bid more attractive.

Montebourg said the Siemens offer would have hit opposition from Brussels.

"The Siemens offer … came up against the competition rules that are overseen by the European Commission," he told journalists.

"This is an obstacle to the creation of new European and multinational industrial champions. This is a lesson to ponder for the new European Commission," Montebourg said.

Siemens chief Joe Kaeser said in a statement on Friday that the company "understands the national interests of the French government regarding the reorganisation of Alstom".

The beleaguered Alstom, which feels that its energy businesses — which range from wind power to turbines for nuclear reactors — are not large enough to compete globally, originally approached GE.

When Hollande's government learned of the advanced talks to sell the power business, it objected on the grounds that jobs and decision-making could be lost.

It instead encouraged Siemens to make a counter offer, hoping that a Siemens-Alstom tie-up would create a global-scale European group. Siemens then linked up with MHI to present a rival offer.

The fate of Alstom, which employs 18,000 people in France out of a total 90,000 worldwide, is an important issue for the French president, who is battling to reduce a huge trade deficit and record unemployment as his approval ratings have dropped to record lows.