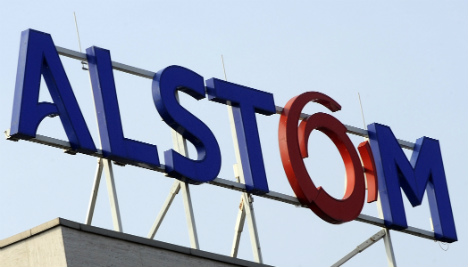 Economy Minister Arnaud Montebourg said he had sent a letter of intent to GE head Jeff Immelt laying out the terms of the alliance, chosen over a rival offer from Germany's Siemens and Japan's Mitsubishi Heavy Industries.

Under the proposal, the French state would take a controlling 20 percent stake in power-to-rail group Alstom by buying two-thirds of the shares owned by French group Bouygues as a show of "patriotic vigilance", Montebourg said.

A nuclear and steam unit backed by Paris is also planned, which Montebourg said "ensures the effectiveness, robustness and sustainability of this alliance."

Shares in Alstom rose 1.1 percent to close at 28.00 euros in response to the news.

Alstom's board will decide whether the group should enter into exclusive negotiations with GE before the offer expires on Monday.

GE confirmed that Immelt is currently reviewing the offer.

The future of Alstom has been at the centre of a trans-Atlantic tug of war for several months after President Francois Hollande's Socialist government objected to the US giant buying the jewel of French engineering, and encouraged a rival offer by Siemens and Mitsubishi.

Early on Friday, Siemens and Mitsubishi improved and simplified their linked offers, increasing their valuation of Alstom's energy division to €14.6 billion, less than a day after GE had made several changes to make its bid more attractive.

Montebourg said the Siemens offer would have run up against European Union competition rules, accusing the bloc of standing in the way of creating European corporate giants.

"The Siemens offer … came up against the competition rules that are overseen by the European Commission," he told journalists.

"If we wanted today to create an Airbus the European Commission — with its very ideological vision on competition — would prevent us," he said.

"This is an obstacle to the creation of new European and multinational industrial champions. This is a lesson to ponder for the new European Commission," Montebourg said.

The beleaguered Alstom, which feels that its energy businesses — which range from wind power to turbines for nuclear reactors — is not large enough to compete globally, originally approached GE.

When Hollande's government learned of the advanced talks to sell the power business, it objected on the grounds that jobs and decision-making could be lost.

It instead encouraged Germany's Siemens to make a counter offer, hoping that a Siemens-Alstom tie-up would create a global-scale European group.

Siemens then linked up with Mitsubishi Heavy Industries (MHI) to present arrival offer.

Alstom, which employs 18,000 people in France out of a total 90,000 worldwide, is an important issue for the French president, who is battling to reduce a huge trade deficit and record unemployment as his approval ratings have dropped to record lows.