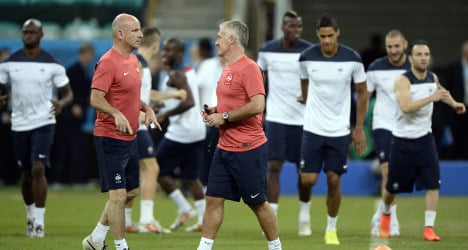 No sign of a strike among the French team this time round. Photo: Franck Fife/AFP

France can almost guarantee qualification from their World Cup group on Friday if they manage a victory over Switzerland in Salvador.

Les Bleus are in form after beating Honduras 3-0 in their opening match but they face a much stiffer challenge against a Swiss team who are eager to cast themselves as underdogs.

Switzerland have tried to pile the pressure on France by claiming the underdog tag for the Alpine neighbours' World Cup Group E clash.

Both teams won their openers, with France topping the table after a convincing 3-0 win over Honduras, while the Swiss secured a last-gasp victory over Ecuador.

Super-sub Haris Seferovic netted in the last minute of injury time to claim a 2-1 come-back victory after the Swiss had fallen behind to Enner Valencia's first-half header.

Sixth-placed Switzerland are 11 places higher than the French according to FIFA's rankings, but insist those standings mean nothing.

Should expats in France support Les Bleus at the World Cup "It is France who are the favourites."

Nevertheless, both sides are eager for a win at Salvador's Arena Fonte Nova, which would give them control of the group.

"We're in a special position with France being our neighbours and it's a derby, so to speak, but if we are to have a chance, we really have to go beyond our limits," said Swiss coach Ottmar Hitzfeld.

"They are a team who have put in great performances and were impressive in their play-off win against Ukraine.

"They put in an explosive performance and played with confidence.

"They are very flexible and can switch very quickly, they work like a machine.

"We'll have to be aggressive on attack, counter-attack quickly and then we'll have a chance."

Friday's match falls on the fourth anniversary of the French squad's infamous strike during their South Africa 2010 campaign when the team refused to train in support of Nicolas Anelka after a row with then-coach Raymond Domenech.

France captain Hugo Lloris says the anniversary will not be a factor as they chase the win which would leave them on the verge of the knock-out phase.

"We're here to live an adventure for as long as possible with the best results possible."

France coach Didier Deschamps has plenty of options up front with Arsenal's Olivier Giroud, who spent most of the Honduras game on the bench as 22-year-old Antoine Griezmann shone, eager to start.

Midfielder Yohan Cabaye will not feature after he came off in the Honduras match with a hamstring injury.

France only squeezed into the World Cup finals by narrowly defeating Ukraine in a play-off.

But they have scored 21 goals in their last six games starting with the stunning 3-0 win over Ukraine in Paris last November, which confirmed their Brazil 2014 berth.

"The match against Ukraine allowed us to live a unique experience and regain our confidence, but we have to maintain that with victories," added Lloris.

"We are strong and resilient, but you have to maintain the balance in the team by winning.

"One bad performance can jeopardise everything. You have to keep winning, regardless of who we play."

Deschamps is hoping for another high-scoring game in Salvador at the stadium where the most World Cup goals have been scored so far.

The Netherlands started the trend when they hammered holders Spain 5-1 last Friday, then Germany also went goal-crazy in their 4-0 romp against Portugal on Monday.

"I hope so for the public, the fans who come want to see as many goals as possible," said Deschamps.

"You can have very good goalless draws, but it's always better if you score a few."