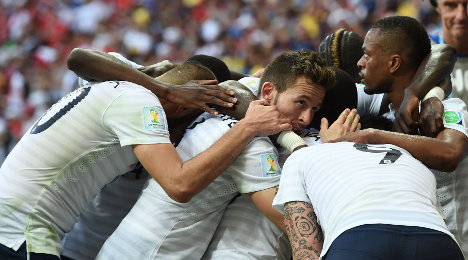 French players celebrate scoring in their impressive win over Switzerland on Friday. Photo:AFP

France laid down a marker at the World Cup after thrashing Switzerland 5-2 in Salvador on Friday.

Arsenal forward Giroud set the ball rolling by thumping home a Valbuena corner with his head.

Just a minute later, Benzema anticipated a Valon Behrami pass back and teed up Matuidi to beat Swiss goalkeeper Diego Benaglio, who should have done much better, at his near post.

Johan Djourou was harshly penalised for a foul on Benzema in the box but justice was done when Benaglio parried the French striker's spot-kick. Yohan Cabaye firing the rebound against the bar.

But the respite was short-lived as Giroud crossed for Valbuena to tap home on a lightning counter-attack, giving France a 3-0 lead at the break.

Switzerland capitulated late on as Philippe Senderos missed a through ball from substitute Paul Pogba and Benzema nutmegged Benaglio.

The Real Madrid forward then set up Sissoko to fire home from an angle as France ran riot before Dzemaili's late free-kick crept inside the post and Xhaka slammed pas Hugo Lloris after latching onto a chip over the top.

Benzema thought he had scored a sixth at the death, but the referee had already blown his whistle.

The other teams left in the World Cup will now know the French mean business.