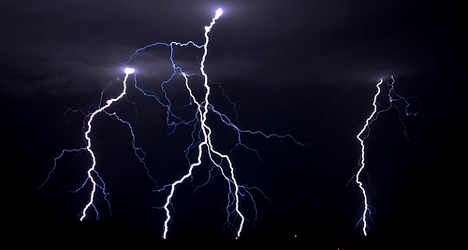 The boy was hit by the lightning bolt late on Thursday morning after being unable to hear a warning from tour guides to close his umbrella, Italy’s daily newspaper Il Messaggero reported.

The boy was visiting the famous volcano, which devastated the city of Pompeii after an eruption in 79 AD, with his mother and sister when the accident happened, the newspaper said.

He is now in intensive care at San Leonardo di Castellammare di Stabia hospital in Naples.

The accident came a day after a man died after being struck by lightning outside a cemetery in Latina, a town south of Rome.

Deadly lighting strikes are rare but they do occur. Every year in France, lightning strikes 100 to 200 people, with 10 to 20 deaths annually, according to the French lightning protection association (Association Protection Foudre).

Only last summer two people in France were killed and four others were injured by lightning strikes.

Four hikers also needed treatment for injuries that same month after being electrocuted by lightning in the south of Corsica.