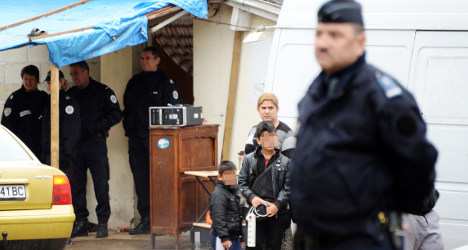 British media have published a graphic photo of the Roma teen beaten by vigilantes in a Paris suburb. Photo: Jean-Pierre Muller/AFP

A shocking photograph reported to be of the Roma teenager who is fighting for his life after being attacked by vigilantes in France was published online by Britain's Daily Telegraph on Wednesday.

Accused of robbery, the 16-year-old called Darius was dragged into a basement in a town north of Paris on Friday, savagely beaten by a dozen residents of a housing estate and left unconscious in a supermarket trolley where he was later found.

He is currently in a medically induced coma in a Paris hospital, suffering from several skull fractures.

The graphic photographs, which have yet to be verified by the teenager's family, were given to the British newspaper by a man who lived close to the camp where the victim lived.

They show an apparently badly beaten youth curled up in a shopping trolley. The man, who wishes to remain anonymous, said he found the teenager unconscious in the trolley late Friday. News of the attack in Pierrefitte-sur-Seine emerged only Monday, sparking widespread condemnation.

President Francois Hollande on Tuesday called it an "unspeakable and unjustifiable" act and asked "that everything be done to find those responsible for this attack".

The teenager, who lived with his family and other Roma in a squalid camp that had sprung up around an abandoned house, was accused of breaking into an apartment in the estate.

A police officer said a group of assailants took the boy away by force, then locked him in a basement and beat him.

Many of France's 20,000 Roma live in extreme poverty in makeshift settlements with little or no access to basic amenities including even water.

Their presence in the illegal camps on the fringes of towns and cities has often spurred controversy in France where they are accused of being behind a rise in petty crime.

France also pursues a controversial policy of forcibly evicting Roma from their camps, often paying them to return to their countries of origin, mainly Romania and Bulgaria.