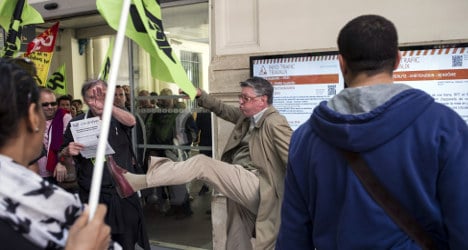 French commuters, like this one, have had it with the ongoing rail strike.Photo: Fred Dufour/AFP

“There’s no doubt that we are arriving at a turning point,” Thierry Lepaon, Secretary General of the CGT-Cheminots union told RTL radio on Thursday morning.

However, Lepaon added that it was ultimately down to rail workers to decide on when they would end the strike, which is in protest over rail reforms.

“It’s up to them to know if the action that they brought has been satisfactory, in order to remove the picket line,” he said.

But for some rail workers, stopping the strike at this stage is simply not an option.

“Even if it lasts three weeks, I’ll be there,” an unnamed ticket inspector told France Bleu Gironde, according to Le Parisien.

“If necessary, we will eat potatoes and rice until the end of the year,” a striker named Pierre added.

The news comes on the day that French MPs are set to end their debate on rail reforms.

On Wednesday evening a package of amendments aimed at appeasing unions was voted by the National Assembly.

As the strike enters its ninth day the number of strikers has reportedly decreased to 11.8 percent compared to 28 percent on the first day of the strike.

According to Le Parisien, an average of seven out of ten trains should be in operation on Thursday on major train lines and even more TGV trains in the East and the North of the country. But fewer trains will be operating in the South-East and between small towns.

Around half of Intercité trains will be in operation and two thirds of TER regional trains, with normal traffic reported in Brittany, western France.

In the Ile-de-France region two thirds of trains are in operation.

Quoted in Le Parisien, Guillaume Pepy, head of the SNCF said: “It’s time to get back to work for public service. We have lost €153 million, the equivalent of 15 trains in the Ile-de-France region.”

However Sud-Rail, SNCF’s third-largest union, has called for the strike to be extended, insisting that the amended reform was “far from the demands of strikers”.

Meanwhile, tempers are running high among commuters, with the commuter association for the Saint-Lazare network which operates in the north and west of the region, demanding an “immediate halt” to their nine-day ordeal.

The strike, which is the largest in French history since 2010, has been prompted by a reform aimed at tackling the rail sector's soaring debt, which stands at more than €40 billion and is set to almost double by 2025 if nothing changes.

“The heart of the matter is that we are horrified. It is the preparation for privatization of rail transport in our country. The government wants to allow competitors to operate train on the SNCF network, who will compete with today's rail transport," he told France Inter radio.

France's move towards the deregulation of its rail system is at the behest of the EU, but Lepaon says the government should be reinforcing the public service and oppose the opening up to competition.