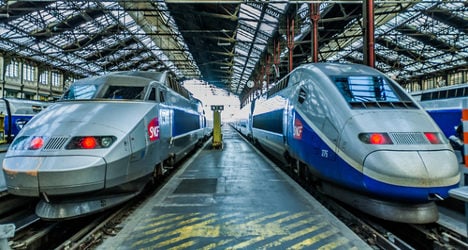 A Britain explains why he loves the French rail system. Photo: TGV/Ostill.

Ian Moore is the author of à la Mod and a stand up comedian. The views expressed here are his own.

It used to be said of the old British Rail timetable that it was the greatest work of fiction since the Grimm Brothers’ collected Fairy tales.

Certainly when I first moved to France I was so inured to train delays that to see the shock on French people’s faces as a train apologetically approached the station, sometimes as much as two minutes late, was actually quite comical. ‘You don’t know you’re born’, I thought.

I’m going to lay my cards on the table here, I love French trains.

Trains are vital in France and not just because of travel logistics; though with France being a big country the investment in a high speed rail network was important not just for business infrastructure but so that families could see each other.

It’s a travel option that makes the country smaller as opposed to the railways in Britain which can be so ponderous at times that they actually make a small country seem much, much larger. But it’s also a symbol of national pride: they invested in it, it works and, especially with the TGV, it is world-renowned.

The trains are clean, comfortable, generally very busy (especially on a Sunday I find), self policed – hey kids, try listening to your music without headphones on a French train – and punctual.

I was on a train last week from Tours to Charles de Gaulle airport and because of the strike there were no seats left. I stood in the bar instead, not an entirely unfamiliar position, but was wary because there was a large group of male twenty-somethings having a party. I’ll be honest, if that was in the UK, I’d move carriage.

These lads though, each drinking daintily from the dozens of (not cheap) red wine bottles on hand, weren’t threatening. They were loud certainly, but one of them even got out his piccolo (not a euphemism) and started banging out old folk tunes.

If the French have anything to learn, it’s that they really need to up their game on alcohol-fuelled, train-based anti-social behaviour.

The trains are also, certainly compared with British trains, relatively reasonably priced. There are so many ways to get a reduction on ticket prices over here that when you buy a ticket and say you don’t have a ‘reduction’ you’re regarded as frankly letting the side down.

I once spent an extra twenty minutes trying to buy a ticket as the harassed sales clerk desperately tried to find a way to get money off for me. I now have a Carte Famille Nombreuse which, because I have three children, gives me 30% off rail prices. If I had four children it would be 40% and so on, and that’s quite a saving.

Some people suggested, in the way that over-familiar party bores often do, that our third son was an ‘accident’. You should see their face when I tell them that ‘no, actually he was conceived to reduce my travel overheads.’

Alas though, it’s not all rosé. This latest strike on the French SNCF train network is now in its ninth day and it’s no longer funny.

The problem is that no-one is really sure why there’s a strike in the first place. Of course the cynical among you will obviously be thinking ‘well, it’s France, since when did there need to be a reason?’ But it’s far more complicated than that.

The French, in my opinion correctly, believe that striking is a right; that the employer (by and large distrusted) has to be given a dig in the ribs occasionally just so they don’t get above themselves and start raiding pensions, cutting wages and generally indulging in a load of fat-cattery.

That’s all very well, and when you speak to most French people they’ll back a strike because they feel it’s for the collective good, but this one is murky.

The whole rail network is €40 billion in debt and it’s rising. The government’s solution, or at least one of the solutions, is to merge the RFF, which manages the tracks, with the SNCF, which runs the trains and two of the unions, there are four, object strongly to this and have downed steering wheels and ticket punchers in protest.

Ostensibly then, this isn’t about safety or wages, this seems like a practical solution to an urgent problem so the public, usually so supportive of strikes, are a bit wary, especially as it’s going on so long. Also, train drivers in France enjoy incredible perks.

They are highly paid for one and have the option to retire at fifty if they want to; these people – and their families – enjoy privileges that most employees, especially in the private sector, simply don’t get in their job, so while everyone else is feeling the pinch there’s a sense of ‘what have they got to moan about?’

This is a rare thing in France, that industrial action is seen not as a display of collective will and for the benefit of the wider population, but as a narrow self interest – and therefore un-French. It’s also coincided with the start of the baccalauréat week in France which means that it’s not just employers being given a bloody nose or commuters inconvenienced, but kids sitting their exams because, like I say, it’s a big country and a lot of kids get the train to school.

Half of them would have had to sit the four-hour philosophy exam this week and according to ‘The Economist’ one of the questions which these students would have had to ruminate on was, ‘Do we live in order to be happy?’

My response to that would probably be, ‘I’m sitting a four-hour philosophy exam, what do you bloody think?’ But as I stood on a train back home last Sunday in a sweaty, over-crowded TGV heading south out of Paris Montparnasse, for a brief moment I wondered if all this commuting is really worth it? Then I realised I was on the top deck of a train.

The top deck! Man, I love that! So of course it’s worth it and by and large, it’s the French rail system that helps to make it so.

C'est La Gare was first published on www.ianMoore.info/cest-la-gare/  To find out more information about Moore, a British comedian and author based in rural France, you can visit his website HERE.

Are you a blogger based in France? Interested in sharing one your posts with The Local's readers? Email us at [email protected] and we'll take it from there.