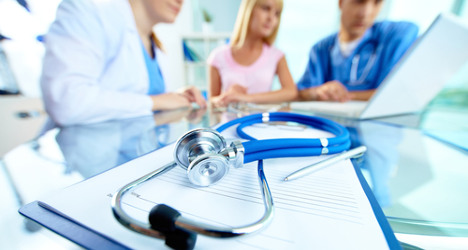 Doctor's visits could soon be free in France. Photo: Doctor.

The long-awaited proposals from Health Minister Marisol Touraine would represent some of the biggest changes to the country’s highly-regarded healthcare system in years.

In focusing on access to doctors and harm reduction polices toward hard-drug users, Touraine says she aims to revise the country’s approach to health.

“France needs to reorient its healthcare system to deal with the challenges of aging and chronic illness,” Touraine told French daily Le Monde: “The system must set prevention as a priority. This system is too complicated for many of our citizens, in some cases it’s inaccessible.”

However, the proposals the minister laid out on Thursday won’t be submitted to parliament until September and if they are approved would start to take effect in 2015.

24-hour doctor hotline: France doesn’t currently have a standardized system for reaching a doctor for advice outside of office hours. So the minister wants to create a three-digit phone number for each of the 96 departments in metropolitan France, via which patients can reach a doctor day or night.

'Free' doctor's visits: Patients would no longer have to pay up front for a portion of the cost of a doctor's appointment. Instead, anyone covered by France’s healthcare system would simply present their national insurance card, called their Carte Vitale, and the visit would be free. Though the cost to patients is already relatively low in France, critics are worried free doctor's visits could lead to practitioners being inundated.

More ‘shooting galleries’: Touraine wants to clearly define a framework for the government to experiment with running safe injection centres, known as 'shooting galleries' for hard-drug users. The idea of providing a clean, controlled environment in order to stop the spread of disease and overdoses has been highly controversial in France.

Introduce class action suits: France doesn’t have the litigious culture of some Anglo countries, particularly the United States, but that could change. Touraine wants to lay the legal foundation for a class action-type lawsuit in France that would allow large numbers of plaintiffs to sue over medical treatments that caused harm. The idea is to streamline the process of compensating injured people. Similar class action suits have already been brought in for comsumers.

Clearer food labels: The minister wants to use color-coded labels on food packages to make healthy eating easier. Food already carries nutritional information in France, but the proposed labels would provide a ‘thumbs up or thumbs down.’ However, France is still studying what this type of labeling would look like.