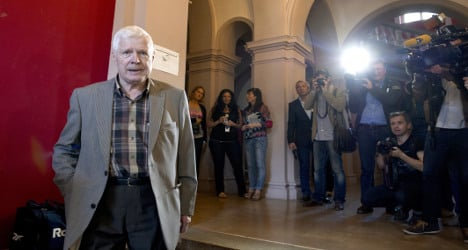 A 76-year-old Frenchman was convicted Wednesday of having kidnapped a German ex-doctor who had killed his daughter, but he avoided jail time as the court handed down a suspended sentence.

The court in the eastern French border town of Mulhouse gave Andre Bamberski a suspended one-year sentence for having abducted Dieter Krombach in Germany and brought him to France to face trial.

Krombach was found bound and gagged in 2009 near the courthouse in Mulhouse after Bamberski hired a kidnap team who snatched the ex-doctor from his home in the southern German town of Scheidegg.

Bamberski said he was "a bit disappointed" by the ruling, believing he should have been acquitted because he had a "moral compulsion" to act. He said he did not plan to appeal.

Krombach was convicted in 2011 over the death of Bamberski's 14-year-old daughter Kalinka — who was living at the German's home with her mother and younger brother – in 1982.

Germany cleared Krombach of her death and refused to extradite him. But Bamberski was convinced of his guilt, especially after Krombach was convicted of drugging and raping a 16-year-old patient in 1997.

The two men who carried out the kidnapping – Anton Krasniqi of Kosovo and Georgian Kacha Bablovani – were also found guilty and each sentenced to a year in prison.

Krombach, 79, did not travel from prison in Paris to attend the trial for health reasons.