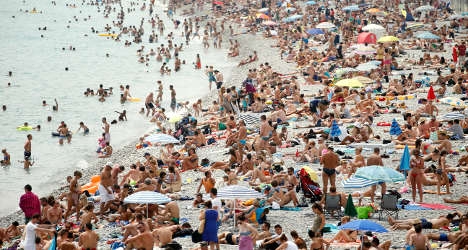 One American living in France simply cannot cope with all the days off. And he works for The Local France. Photo: Valery Hache/AFP

I have too many vacation days.

Just because I live and work in France I get five weeks paid  vacation, ten public holidays in 2014 plus scores of other days that I’m apparently entitled to because of the country’s 35-hour work week.

This weekend I tried to explain my problem to a French friend, who thinking I was joking, just laughed and said, “Well, you’ll get used to it.”

I know this sounds like the sort of divorced-from-reality thought that turned people off to Gwyneth Paltrow, but I persisted: “I’m not trying to say there is anything wrong with all this time off, but seriously what do you do with it?”

My French friend, obviously stunned by my question, just gave a marvelous Gallic shrug and said: “Nothing.”

That was of little help.

If I were storing my vacation hours around the house they’d be leaking from under the closet door like a dirty secret. At night, I imagine them staring angrily at me like unused exercise equipment.

I guess the problem is that I’m American and have always had just two weeks vacation. And because I’m a reporter working even on Christmas Day was just part of life.

I’ve generally taken a week in the summer and one around the holidays and it’s always been enough. But since arriving in France I feel like I’m off all the time and these days are turning into a burden, not least financially.

I just spent a couple of hundred euros for a long-weekend train trip to visit my in-laws. Then there are the hundreds more I spent on a trip to Sardinia in May. Not to mention the Moby Dick of French vacation season: August. I'll be left penniless.

In the US most people take short and infrequent trips, so they don’t get too concerned if they’re a little expensive. It’s a special occasion and a moment to splurge. In French terms, it’s a shot glass full of espresso, to the watery bowl of American coffee.

It seems like my wife and I spend an outsize amount of time trying to figure out where to go. It’s a conversation that’s on the bottom of the to-do list of unpleasant domestic tasks like tax paperwork and washing the bathroom floor.

But in the back of my head I know if I don’t figure out our travel plans, everything will be booked up or too expensive. Or worse I’ll end up at home on a sort of unintended staycation that is good for organizing closets.

And then there's the stress that comes with deciding where to go for each holiday or extended weekend called a "pont". It’s already provoked fights in our house.

All that trauma just to decide which beach we are going to lie on. I mean it's not a decision that will affect the future of our kids.

These vacation days are lots of work too. Let’s say you take the cheapest option, a simple long weekend at a low-cost municipal campground. You’ve still got to pack your bags, get yourself there somehow and then proceed with the effort generated by living in a way our ancestors moved indoors to avoid.

The simplicity of the mere two weeks I had in the US now feels akin to some kind of post-modern exercise in streamlined living, like people who are perfectly happy to have only one piece of furniture.

Don’t get me wrong, the time off is nice. It’s great to have a break, especially with the stresses of moving to France and the daily combat of taking the Metro and RER and so on. And now all these countries' capital cities like Rome and Stockholm are less than a two-hour plane ride away.

A two-hour drive in the United States is not enough to get anywhere, I mean some hardcore commuters are in the car that long just to get to work everyday. But maybe I’ll just hold on to my quickly multiplying vacation days and cash them out someday and give the money to somebody who really needs it.

My French friend who listened to me whine this weekend thinks I just need to change, adapt to my new surroundings. The American lifestyle is unhealthy. People are overweight, they work too much and for what?, he noted. He's right, but feeling that I was bordering on one of those "whose country is better" discussions, I decided to just let this one go.

Have you come to France from the US? Can you sympathise with Joshua Melvin? Is there a downside to too much vacation?