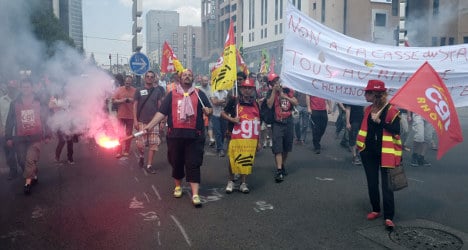 Commuters in France faced yet more disruption on the rails on Wednesday as one of the longest running train strikes in recent years entered its second week.

However despite the ongoing industrial action, rail operator SNCF forecast an improvement in the number of trains running on Wednesday compared to previous days when commuters faced major travel chaos.

French rail union, CGT Cheminot, announced on Wednesday its workers had voted to continue the strike by another 24 hours.

SNCF said on average there would be seven out of ten trains running on the main lines. In and around Paris the situation in the RER service should also improve on Wednesday with one train running every seven minutes on the RER B that serves the two airports.

On the RER C and E one out of two trains were running and on the RER D there will be a train every ten minutes.

CLICK HERE for more information on the trains that are running. Travellers can also call 0 805 200 440 to find out information.

French PM Manuel Valls has insisted the government would not back down to the demands of strikers and vowed that the reform would pass.

Transport Secretary Frédéric Cuvillier called on MPs to back the reform in order to “save and assure financially the future of the public rail service.”

The strike has been prompted by a reform aimed at tackling the rail sector's soaring debt, which stands at more than €40 billion and is set to almost double by 2025 if nothing changes.

'The government should protect a public service'

“The heart of the matter is that we are horrified. It is the preparation for privatisation of rail transport in our country. The government wants to allow competitors to operate train on the SNCF network, who will compete with today's rail transport," he told France Inter radio.

France's move towards the deregulation of its rail system is at the behest of the EU, but Lepaon says the government should be reinforcing the public service and oppose the opening up to competition.

"We ask the government to take responsibility so the public service can continue to exist," Lepaon said.

On Tuesday tensions appeared to rise as the strikers protests became more militant.

There were brief clashes with police outside the National Assembly and strikers also briefly blocked the tracks in Paris's busy Montparnasse station.

In the afternoon, up to 300 strikers forced their way into the office of public television France 3 in the eastern city of Lyon, demanding a live debate with Transport Minister Frederic Cuvillier, but later left without getting their request met.

In the southern port city of Marseille, meanwhile, their peers took direct action by addressing passengers in the railway station's main hall.

"There is a real rising anger at the way we have been singled out for blame" by the government, said Philippe Goalard, a rail worker since 1995.

"Perhaps we haven't communicated enough… and in this second week of the strike we need to explain more."

However the public mood appearsto be against the strike.

The walkout, in a country where strikes occur regularly, drew outrage with a poll published in Le Parisien newspaper Tuesday showing that 76 percent of the French opposed the protest, which has so far cost at least €80 million ($108 million).

The poll also showed that only one in three French understood the reasons behind the strike.

French rail strike: What is all the fuss about?