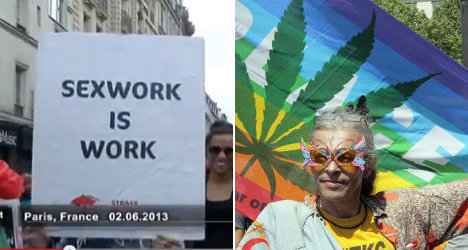 France said 'non' to an EU order to include drug sales and prostitution in its GDP calculations. Photo: Jacques Demarthon/AFP

Statisticians at France's nation data agency say because drug users and certain types of prostitutes are not operating of their own consent France doesn’t have to comply with new EU rules on calculating the country’s GDP.

In an effort to standardize economic figures from across the union’s 28 member states, the European data agency Eurostat ordered countries to start including revenues from the sex and drug trades in their figures.

While Belgium and Spain have already agreed, Britain says adding the revenue from drugs and prostitution could add 1 percent to its GDP or €10.9million.

Eurostat earlier estimated the average increase due to the new calculation would be 2.4 percent, with the highest rises for Finland and Sweden at 4-5 percent followed by Austria, Britain and the Netherlands at 3-4 percent.

INSEE says including revenues from the drugs trade alone would add about 0.1 percent to France's GDP or around €2 billion.

But France says it will not follow the lead of its neighbours because it argues Eurostat's rules say transactions must be taken into account only when there is mutual consent.

“In regards to drug trafficking, we have long argued that because people are addicted they are not consenting freely to the exchange,” Eric Dubois, director of economic studies at France’s national statistics agency INSEE, told French daily Le Monde.

Dubois went on to note the type of prostitution that takes place under the cover of front businesses is already taken into account in France’s GDP. However, the statisticians again took a stand against including street sex trade in the figures.

“Street prostitution is more so part of a mafia network and includes the trafficking of people without papers, etc.,” Dubois said. “Accordingly, the mutual consent criteria probably couldn’t be confirmed.”

In a sort of compromise, France has agreed to include illegal drugs and prostitution in a calculation of national income, which it will share with the EU. The French numbers could be important as the country represents Europe’s second largest economy.

The French have had a troubled relationship with the drug and sex trade in recent years. Though France is among the biggest consumers of cannabis in Europe, the drug remains totally outlawed here, though a green party lawmaker is trying to legalize it.

French lawmakers also backed a bill last year to penalize the clients of prostitutes, which the government said is an effort to protect human traffic victims. Though sex workers say the bill, if it becomes law, would force them further into the shadows.