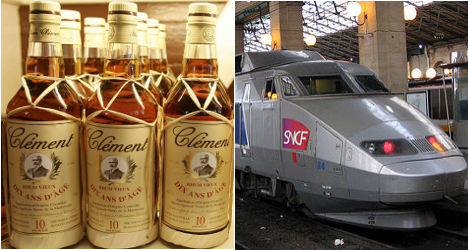 As the SNCF strike drags on an embarrassing video has emerged. Photo: Pascal Pavani/AFP, OliverN5/Flickr

The video, captured by whistleblower and leaked to the media this week, will do nothing to improve the popularity of French rail workers, who thanks to the ongoing crippling train strike are rapidly becoming public enemy number one in France.

The nearly two-minute clip (see it here) records a group of rail workers having an informal gathering in February, with rum punch and snacks at an one of the most important switching stations in the Paris region. Because the station is not equipped with the latest technology, the traffic controllers there direct trains manually for the most part, French magazine Le Point reported.

But instead of a strict and sober environment, viewers see workers chatting about the potency of the rum rather than paying attention to the control panel. However, the video does eventually show one of the controllers at work, but it appears to capture a narrowly avoided accident.

Because the controller made a mistake, a train was directed the wrong way, where it could have ended up on an already occupied track. The whistleblower, who is filming his colleagues without their knowledge, asked: “I guess the rum is going to your head, huh?”

The whistleblower told Le Point he revealed the video to his supervisors out of fear for passengers' safety. Yet, he claims they took no action. Instead, after failing a written test for an internal promotion, the whistleblower said he was let go.

For the moment SNCF hasn't said much about the clip, telling Le Point only that it forbids any alcohol at its work sites.

The video comes as the rail worker strike stretches into its 8th day, making it the longest walk out since 2010. While France has a certain tolerance for strikes, this one is getting little public support. A recent poll showed just a tiny portion of the public backs the workers, who are protesting a propose reform the government says will bring down the agency's ballooning debt.

However, certain rail unions, chiefly CGT, have argued the reform will not fix SNCF and does not set aside adequate funds for crucial maintenance and expansion.

Travellers left stranded by the strike told The Local they were left angry and confused by the industrial action which didn’t seem to have a clear point. There was also a sense of unfairness among the travellers who felt the SNCF workers were also overpriveleged.