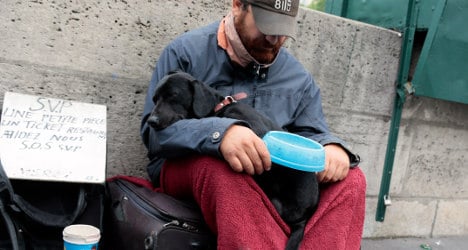 France’s poorest neighborhoods are clustered in the north, around Paris and many are in just one slice of Marseille, according to a new map of poverty that could unlock billions of euros in revitalization funding from the government.

After years of political battles over how urban planning money was doled out, the government undertook a multi-year overhaul of its criteria for poverty, which resulted in the map unveiled on Tuesday by Urban Planning Minister Najat Vallaud-Belkacem. In stunning clarity, it pinpoints France's 1,500 poorest neighbourhoods.

According to a definition chosen by lawmakers, a neighborhood is considered poor if half its residents live on less than €11,250 per year, which is 60 percent of the national median income.

While such low income levels are cause for alarm among France's leaders, the poverty level makes the neighborhoods eligible for a portion of €300 million in government grants, as well potentially for some of €5 billion more that is expected in the autumn from national leaders.

Not surprisingly, given it is France's largest population centre, Paris is home to some of the country’s densest clusters of underprivileged quarters. Many of the poorest were in the northeastern corner of Paris and in the northeastern suburbs of the capital.

However, the western and south western suburbs of Paris, which contain some of the greatest concentrations of wealth in the country, are home to virtually no neighborhoods that meet the government’s criteria for poverty.

Poverty is also heavily concentrated in France's Nord and Pas Calais areas, which include the city of Roubaix, long known as ground zero for Frances less privileged. These areas, like many formerly industrial places, have struggled to recover from France’s declining industrial base.

A map of France’s second largest city, Marseille, highlights a striking division in poverty between the northern and southern parts of the city. Marseilles’s poorest neighborhoods are densely concentrated in the north, where poverty, drug dealing and assault rifles combine to create zones of high violence.

Yet, on the extreme other end of the scale, few of France’s poorest neighborhoods are in the rugged coastal area of Brittany. The lack of concentration, however, does not fully reflect the poverty in the area, which is due to the ever increasing difficulty of smaller-scale farmers to make a living. Farmers, in the form of the Bonnet Rouge movement staged a rebellion last year in Brittany over a proposed heavy-good vehicle tax.

To see the poverty map of France in full you can CLICK HERE.