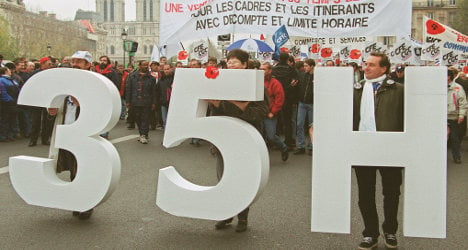 In 2006 the former French Prime Minister Lionel Jospin, one of the key protagonists behind the creation of France’s 35-hour work week, defended the reform by simply saying: "One makes more, while working less."

“When you bring working hours down from 39 to 35 per week without a reduction in salary, you, by definition, give a comparative advantage to workers," Jospin went on.

While Jospin's supporters marvelled at the humane piece of economic policy that was introduced in 2000, his critics, both in France and beyond its borders, have continued to argue the now sacred 35-hour week acts as a jobs-killer and a brake on the economy.

Not surprisingly as France continues to struggle to breathe life into the ailing economy, MPs have decided it is once again time to look at the question of whether the country would be better off ditching this landmark Socialist legislation, that makes France unique in the European Union.

A new commission has been tasked with looking at the “societal, social, economic and fiscal impact” of the law, although for now at least, there's certainly no talk of ditching something that is as synonymous with France as foie gras and rail strikes.

But what would happen if the commission's report or even the financial crisis persuaded the government that it was time to scrap the flagship legislation?

For economist Henri Sterdyniak from the French Economic Observatory ditching the 35-hour work week when the economy is in dire straits would have "catastrophic" consequences. If French leaders decide to end the shortened week, now is not the time, he tells The Local.

“It would mean companies wouldn’t have to hire anyone. That would have a catastrophic impact on the unemployment rate,” Sterdyniak said. “It would essentially be telling firms to use their current workers ten times more instead of hiring others.

If employees were told they had to again work 39 hours per week, as they did prior to the reforms in 2000, and got no corresponding pay increase, the subsequent cost-free boost in productivity for companies would simply dissuade them from recruiting, Sterdyniak argues.

But dissuading companies from hiring is certainly not what the French government is looking to do at a time of record unemployment. In fact, France plans to cut €50 billion from its budget in the next three years in order to pay for a reduction in payroll taxes on businesses, with the goal of encouraging companies to hire more people.

The 35-hour work week was born of an idea that if everyone puts in just a few hours less on the job it would create a need for extra workers. Jospin's government also handed over billions in subsidies to companies to make up for the cost and added flexibility to how employees’ work time is calculated, all with the intent to spur hiring.

Numerous exceptions in reality mean the 35-hour week applies to slightly less than half of French workers, and does not include managers. A labour ministry report published last year revealed French workers put in an average of 39.5 hours a week in 2011, slightly behind the EU average of 40.3 hours and the 41-hour working week in Germany and 42.4 hours in the UK.

But to get around the 35-hour week law most companies simply offer workers extra days holiday, known as RTT, in return for working a 39-hour week. (Hospital workers protest changes to the 35-hour policy at their hospital in 2002. Photo: Joel Saget/AFP)

But not everyone agrees with Sterdyniak that France would be making its ailing economy even sicker by tossing aside the 35-hour work week.

For Dubus the shorter week has played an integral part in pushing up French labour costs and driving down its productivity.

While in Germany, workers cost their employers €30 per hour, in France it is €33 an hour, said Dubus, and in France workers are on the job for an average of 200 hours a year less than their neighbours, he claimed. The knock-on effect of those figures is that France is producing less and less, leaving it with a €70 billion trade deficit.

'It's about workers' buying power'

Dubus argues getting rid of the 35-hour week would be like taking one’s foot off the brake of a slow-rolling vehicle.

“The goal is to produce more. If you produce more, you are going to have to create jobs,” Dubus said. “Getting rid of the 35-hour week would allow people to work more, spur growth and productivity. Thus it would create new jobs," he said.

He noted the new, longer working week could be rolled out gradually to ease the pain of changing. Though in the end, he believes, it would be well worth it.

"Ultimately this is about workers' buying power," he said. "When people make more money it's good for the economy. They spend it and it helps the whole system."

Economist Gérard Cornilleau, of the French Economic Observatory, also believes French firms would be boosted if dropping the 35-hour week came without any increase in wages. Cheaper labour would mean an advantage for France over its neighbours in the European Union.

"You would have a massive increase in competitiveness. Basically it would decrease everyone’s salary by ten percent,” said Cornilleau.

However, on a warning note, he said: “If it would be good for France, it would be very bad for the EU and basically what is bad for Europe is also bad for France.”

Would it end the stereotype of the 'work-shy French'?

Although productivity in France is above Germany’s and close to that of the United States, according to 2011 data from the Paris-based OECD think tank, the 35-hour week is often used to push the stereotype of work-shy French employees and can dissuade foreign investors.

American CEO Maurice Taylor zeroed in on that reputation in a harsh letter to a French minister in 2013. "The French workforce gets paid high wages but works only three hours. They get one hour for breaks and lunch, talk for three and work for three," Taylor told Arnaud Montebourg, after being asked to invest in a doomed French tyre factory.

For the Observatory's Cornilleau though, it’s laughable to think doing away with the 35-hour week could help undo the potentially damaging stereotypes some hold of France.

“Just because we have a legal maximum working week of 35 hours that doesn’t mean that we work less than other countries,” Cornilleau told The Local. "If we just dropped the 35 hours like that, then yes we would have a reputation, but it would be for all the strikes and protests that would follow," Dubus jokes.

Share your views on the 35-hour-week in the comments section below.