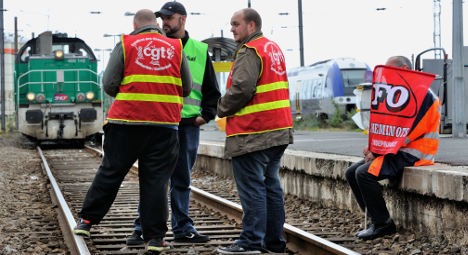 Rail unions show no sign of ending their strike. But what exactly do they want? Photo: Philippe Huguen/AFP

1. What is the reform that has prompted the strike?

Essentially the new law is designed to bring the two main bodies that are in charge of running the French rail system – SNCF and RFF, closer together. The two entities were created when the country's rail operator was split in 1997 at the behest of the EU, with SNCF given the job of running the trains and RFF in charge of the infrastructure. The reform, if it passes parliament, is set to become effective as of January 1st, 2015.

France’s rail system may be lauded abroad, but the reality inside the country is that not everything is running well on the ground and hasn’t been for some time. While the high speed TGV trains and long distance services may operate smoothly, the regional and commuter services are in desperate need of investment, says Jean-Claude Delarue the president of the rail user group SOS Usagers. “Every day trains are breaking down, meaning commuters are arriving late to the office,” he says. Last year's deadly train crash at Brétigny highlighted the need for much-needed investment in infrastructure.

It appears that since they came into being RFF and SNCF have not really enjoyed a good working relationship, in fact some say they hardly communicate at all, and that has caused problems. A recent, highly embarrassing incident saw SNCF order hundreds of new trains that ended up being too wide for stations after being given the wrong measurements by staff at RFF. The furious French government wants to avoid any repeat of such a mishap.

3. What does the reform hope to achieve?

In short "save the rail network" according to France's Transport Minister Frédéric Cuvillier.

To do that, the government aims to take SNCF and RFF and create three entities – SNCF mobilités, which will run the trains, SNCF Reseau, which will manage infrastructure and a new body called Epic which will be tasked with improving coordination and cooperation between the two other bodies.  Epic will be charged with streamlining spending and improving efficiency but its main objective is to reduce the crippling debt, which Cuvillier says will reach a mammoth €80 billion by 2025.

In terms of saving money, French daily Le Figaro estimated the reform could save €700 million, due to reduced IT and real estate costs and a further €500 million because of the unification of the business structure. The reform is also designed to prepare the ground for the deregulation of France's rail services, set to take place between 2019 and 2022. This too is an order from EU chiefs in Brussels. 4. So if it's so important, why are the strikers opposed to this reform?

For the thousands of rail workers who have been on strike for the last six days the reform just does not go far enough. They say the changes, rather than bringing SNCF and RFF closer together, will actually create a “monster with three heads” which they fear will be a premise to the complete dismembering of the state-owned SNCF.

In an open letter to French President François Hollande, the CGT union said the reform "will create two companies, each with two boards of directors, separate contracts with the state… that does not ensure good quality railway transport."

The more radical CGT and Sud-Rail unions say the reform will also fail to solve the issue of the debt, which they claim is holding back the country’s once much-heralded rail system from urgently needed upgrades. Union chiefs say rail operators are handicapped by the need to pay interest on the debt and the reform will simply fail to remove this burden, nor does it provide a plan for the renovation of the network, they say.

The real fear of the unions, however, is that the reform will lay the groundwork for the privatization of France’s rail network in the future. So although there are no jobs on the line right now, there will be in the future, unions say.

5. So what are they proposing instead?

It's important to note that not all unions are on strike. The two other big unions, UNSA and CFDT, are not entirely happy with the reform but they have called for dialogue to achieve the amendments they desire. But the more militant CGT and Sud-Rail unions want SNCF and RFF to be united together in a single entity for only then will the coordination problems that have plagued the service be resolved, they say.

They want a single governing board of directors and a single employee’s council that represents all workers on France’s rail system. When it comes to resolving the debt problem, the unions want the current €40 billion debt taken off RFF’s accounts and placed in a kind of new entity, which would house the debt in a separate legal structure.

6. Is it just about the rail reform?

It seems there may be more at stake for the two striking unions than just the reform. Jean-Claude Delarue notes that the CGT union – the largest and Sud-Rail, the third largest, are “highly competitive”. It appears they are flexing their muscles in a show of strength to other unions and want to appease those on the left of their own organisation. One specialist told French daily Le Parisien that the CGT, the country’s most powerful trade union, is in the process of radicalizing. The “hardened veterans” of the organisation are showing their hand, he said. It's notable that recent talks betweenthe SNCF and the unions did not focus on the reform itself but on issues such as "salaries, working hours and hiring". CGT and Sud-Rail may just be using the the reform as an excuse to push for better pay and conditions.

Who knows. All the talks between the government and unions so far have failed to reach a resolution and the longer the dispute goes on the two sides seem to be unwilling to make concessations.

The two striking unions have proved stubborn so far and despite pressure from the government, they voted on Monday to extend the strike into a seventh day, to coincide with the presentation of the reform to parliament.

While the government is refusing to drop the reform, Socialist Party ministers have so far not been overly critical of the strikers. Their tone may change however, over the coming days. Importantly for the CGT is that although the level of participation in the action is decreasing, the disruption to commuters shows no sign of easing.

With the government insisting that strikers will not be paid for the days lost due to strike action, the workers may take the decision themselves to return to work. SNCF chiefs say it has already cost the economy €80 million.