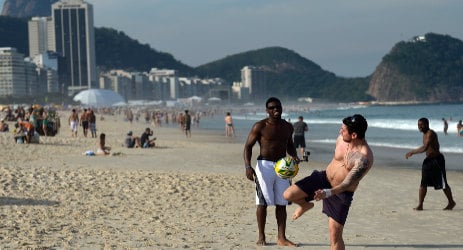 A French police officer, not shown here, in Brazil for the World Cup was arrested for trying to bribe local cops. Photo: Gabriel Bouys/AFP

The story of a holiday-making French police officer in Brazil for the World Cup should serve as a warning to those who think they can get away with anything just because they are in Rio.

The off-duty French officer got picked up by local police with a joint and two sachets of marijuana on him and instead of just taking his punishment, he figured the cops in Brazil would be tempted by a bribe.

Via an interpreter, the Frenchman, who admitted to drug-taking, said he had been told in France that offering a bribe to Brazilian police – which he also admitted – could secure release.

But things didn't work out quite as he'd hoped. The officers detained the Frenchman and he's since been charged with using cannabis and trying to bribe officers.

"According to information from the Mem de Sa (district) police station, he was questioned for drugs use and active corruption," a police spokesman told AFP.

Brazil's G1 news portal quoted the policeman as saying he arrived in the country last month and had planned to leave in 10 days.

He is not with a French delegation working with Brazilian counterparts at the World Cup.