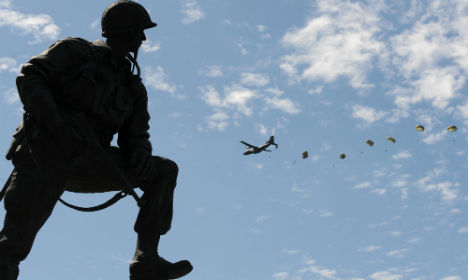 Paratroopers jump on June 8, 2014 in Sainte-Mere-Eglise, northern France, during a D-Day commemoration to mark the 70th anniversary of the World War II Allied landings in Normandy. AFP/Jean-Sebastien

Right after the D-Day landings, their fathers' paths crossed in the war-torn villages of northern France, one a US jazz musician turned soldier, the other a French teenager.

Now the sons of jazz icon Dave Brubeck and a Normandy doctor have come together to write a transatlantic symphony as the world remembers the 70th anniversary of the Allied operation that changed the course of World War II.

"Brothers in Arts — Hommage a Nos Peres", or homage to our fathers, is a symphony written by Chris Brubeck, a composer and jazzman himself, and the musician Guillaume Saint-James, which opens in France in June before moving to the US later this year.

It was a chance meeting in Rennes, in France's northwest Brittany region, in 2012 that saw the two decide to write a symphony about the lives of their fathers and the music they both loved.

Brubeck, one of the greatest jazz innovators of the 1950s who hit the big time in 1959 with his album "Time Out", featuring the classic "Take Five", arrived in Normandy in the summer of 1944, in the weeks after the Allied landings.

Then aged 24, his unit had moved onto Metz in northeastern France where one night he was called on to help out three singers in need of a pianist in an
impromptu show.

Spotted by his general, Brubeck was tasked with creating a jazz band to raise the troops' spirits and introduce the local population in newly-liberated villages to this American genre still new in Europe and definitely exotic in the countryside.

"His boss said to him, 'It's more important for you to make good music than to get killed'," said Brubeck, explaining that his father narrowly missed the bloody Ardennes offensive known as the Battle of the Bulge in the winter of 1944-45.

The battle, a last-ditch German offensive to try and turn the tide of the war, led to the death of 19,000 American soldiers.

Brubeck's band, one of the first to be made up of both black and white soldiers at a time when the US military was still largely segregated, was called the "Wolf Pack".

After the liberation of Europe, the US military provided hundreds of pianos to troops and soldiers, inundating Europe with millions of records and "V-disks" spreading the music of Frank Sinatra, Sidney Bechet, Louis Armstrong, and Bing Crosby.

For the young Alain Saint-James, who was undergoing an operation by candlelight for appendicitis on the day his town of Bayeux was liberated in June 1944, jazz became "the music of the people who saved him", according to his son Guillaume.

Alain, who was only 13 when the war swept through northern France, went on to play the piano in the bars of Saint-Germain-des-Pres in Paris.

Later, after training as a doctor and working in the countryside of Normandy, he would listen to the music of his idols whenever he drove in his car and passed on his passion to his sons.

Decades on, the two sons found themselves at a concert in Rennes.

Learning of their shared history, they came up with the idea of writing a score together, which was later commissioned by the Brittany Symphony Orchestra.

"We allocated the chapters, like for a film," explains Guillaume, 47, a composer himself.

He plays saxophone in the piece, while Chris accompanies on the trombone and the piano.

The symphony, which is 50 minutes long, evokes the early years of their fathers — in California and in France — before moving on the devastation wrought by World War II and D-Day.

At the heart of the work, the two composers have included the jazz rhythms their fathers loved so much, despite the risk of courting controversy among classical music purists.

A drum player and an accordionist accompany the orchestra, evoking the sounds of popular dance from the end of the war.

"It's the key to making this piece. It gives a texture, it changes the whole flavour," says Brubeck, adding that his father — who died in 2012 — "was one of the first musicians to marry jazz and classical".

The piece is being played in Rennes and Brittany from June 12-17 June, and will travel to the US in November.