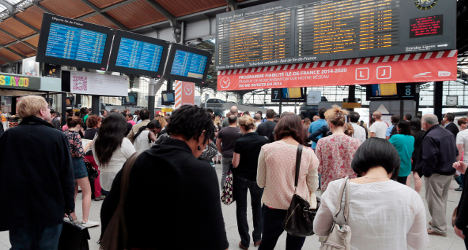 The French public are growing impatient with rail unions who have voted to extend their strike into a fourth full day. Photo: Jacques Demarthon/AFP

After three straight days of cancelled trains and delays, stranded passengers at Gare de l’Est in Paris were left angry, tired and confused by a strike from workers at France’s state-owned rail operator SNCF.

And with unions voting to extend the strike until Saturday evening – the third time they have prolonged the action – their misery looks set to go on.

“It’s outrageous. They have shut everything down for nothing. It’s totally pissed everyone off,” Valentin Linder, 20, a soldier told The Local on Friday. “These people don’t really have anything to complain about to begin with.”

Linder was trying to get home for three-days of leave, but he’d already wasted a third of his time off trying to negotiate the chaos caused by numerous train cancellations due to the strike.

“I don’t even know why they’re on strike,” he said. “Though I don’t think it would make much difference if I did.”

@TheLocalFrance Yesterday was the first time I've seen genuine anger at the strikes.

@TheLocalFrance Normally a sense of 'we're in it together'. Very short fuses yesterday and packed out so no seats. The heat didn't help.

At the source of the strike are two of SNCF’s four unions, CGT and Sud-Rail, many of whose members refuse to go back to work until the government agrees to make changes to a major rail reform bill that is due to go before lawmakers next week.

'I don't know how I'm going to get home'

Transport Minister Frédéric Cuvillier says the bill aims to reorganize SNCF and RFF, which is in charge of rail infrastructure, in order to reduce the ballooning €44 million debt. But the unions say the plan has multiple blind spots, which include a failure to plan for renovation and expansion of the network.

Accordingly, the stakes of the strike seem somewhat abstract to travellers who are dealing with the very real consequences of it.

“It’s rather technical. It’s not like the SNCF plans to lay people off. This strike doesn’t exactly feel essential,” said Hervé Guery, 49, of Nantes. “I don’t know how I’m going to get home tonight.”

Due to the strike his train home had been cancelled and he said no new reservations were possible. He was looking into the possibility of renting a car, having abandoned the hope he’ll land a seat on a train.

The industrial action also felt patently unfair for some. David Butin, 20, a butcher’s apprentice was stuck waiting five hours for his train and wondered when he’d get home.

“There are plenty of other people, who are mistreated in their jobs, but simply can’t afford go on strike. If people in the service industry don’t show up they don’t get paid,” he said. “Only people in big companies can do that. Civil servants especially can do it.”

“But when all this gets started, it’s the customers who pay the price. We pay and nobody asks for our opinion," he added.

For Butin there has been plenty of time to think about it. His train coming into Paris arrived seven hours late earlier in the week. One hour of that was spent with the train stuck on the tracks just minutes away from the station. It was halted because of a demonstration by striking rail workers.

For other travellers there was general doubt over whether strikes were effective at all. Maud Herbelin, 19, a student was faced with a six-hour layover between trains due to the strike and she wondered if the industrial action would send a message.

“Strikes are important. It’s a right. Otherwise the government can get away with anything,” she said. “But just because we strike, does that mean the government is going to change? I’m not sure.”

Rail user groups have also called on the unions to end the action, accusing them of holding passengers to ransom.

"Conditions are really very bad for commuters, especially in the Paris region. It's abominable.

"The strikes have very bad consequences for passengers, because there are so many more commuters now than in the past," SOS-Usagers' Delarue told The Local. "Only a minority of people will find sympathy with the strikers and say "well it's their right".

Yet for people who view the strike as a struggle for the future of France’s railroads, this strike is essential. Yann Guillou, deputy secretary general for performer’s union Syndicat National des Profesionnels du Theatre et des Activities Culturelles,  said he’s fine with a bit of train pain.

“I take the train into the city. Yes, it’s been crowded and it’s been a bit of a hassle” he said. “But I’d rather do that than be on a train when it derails. This strike is ultimately a question of safety.”