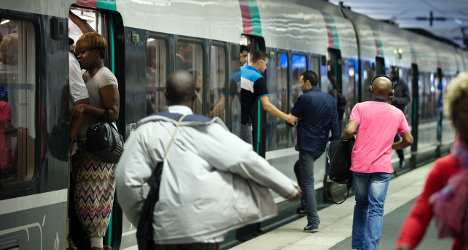 Commuters try to squueze on to a packed train at Gare du Nord during the three day rail strike. Photo: Joel Saget/AFP

After three days of the French rail strike French President François Hollande seems to have had enough.

The president called on rail unions to end their nationwide industrial action that has caused misery for commuters across the country especially in Paris. Though CGT union members voted Friday to continue the strike on Saturday.

Adding one more layer of disruption to a week already marred by strikes from cabbies, rail workers and a warnings about one by Air France ground crews, the Eiffel Tower was shut down for about two and a half hours due to a security guard walk out. But, the Iron Lady was back open to tourists by 3:30pm, when the guards who upset about pay returned to work.

Meanwhile, Hollande has been making the case the strike needs to stop.

"There comes a time when we must know how to stop a movement and be aware of the interests of everyone," Hollande said on a visit to Andorra.
The president stressed that the social conflict was likely to have "negative consequences" for the baccalaureate school exams that start on Monday.
The government fears that if the train strike is extended into next week it could mean thousands of pupils are unable to attend exams, or at least on time.

Despite Hollande's plea there was no sign of an end to the stand-off between French unions and the government on Friday.

Unions, angry at proposed reforms of the rail system, will vote later in the day as to whether they should extend the walk-out even further.

In terms of the impact on travellers the country’s rail operator SNCF suggested that the situation had improved with more TGVs running on the main rail lines.

However as French daily Le Parisien pointed out with this screengrab from the SNCF website getting from Paris to Marseille could be nigh on impossible on Friday.

However the situation in Paris was expected to be worse than in other parts of the country, with only one out of three trains operating during the last two days of strikes. On each morning of the strike so far roads leading into the city and its surrounding suburbs have been clogged with traffic jams.

Rail user groups have expressed their dismay at the extension of the strike.

"Conditions are really very bad for commuters, especially in the Paris region. It's abominable.”

Cuvillier said on Tuesday the sector's debt stood at more than €40 billion ($54 billion), and would likely soar to €80 billion by 2025 if nothing was done to stem it.