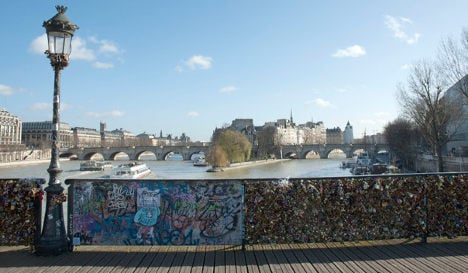 The controversial love locks are to be removed after part ofa bridge collapsed last week. Photo: No Love Locks Campaign

City authorities in Paris have taken away 37 grills, each adorned with half a ton of love locks, in recent months from two bridges in Paris, because of safety concerns, the Town Hall said this week.

The announcement comes after a section of the iconic Pont des Arts bridge collapsed under the weight of the love locks last week. Officials in Paris have frequently often warned of the possibility of a fatal accident due to the danger caused by the weight of the metal.

On Thursday the deputy mayor of Paris Bruno Julliard told a press conference that officials would continue to take down the grills on the Pont des Arts and Pont des l'Archevêché and The Town Hall also intends to take steps to end the craze of lovers locking padlocks to the bridges.

“We have asked the police to dissuade those who sell padlocks on the bridge,” Julliard said.

The iconic Pont des Arts bridge across the Seine in the French capital has for years drawn thousands upon thousands of lovers to take part in a romantic ritual.

They buy a padlock, inscribe their names on it, look around for a gap on the bridge’s side grill, and by securing the lump of metal to it, make a wildly romantic gesture of public and undying love and devotion.

Even though the locks will no doubt reappear as quickly as they were taken away the Town Hall stopped short of enforcing a ban on the phenomenon, which many have long been calling for.

In the short term Julliard said, tourists are being discouraged from attaching the locks to bridges, but in the long term the Town Hall “will endeavour to find an alternative involving the imagination of artists”.

“Handing out fines will fix nothing, we are not going to station police there 24 hours a day,” he said.

The sight of the locks may be romantic to some but others claim the mass of multi-coloured metal has turned Paris into a "visual cesspool".

Two Americans Lisa Anselmo and Lisa Taylor Huff became so fed up with love locks that they founded the No Love Locks campaign.

"We believe the problem will only cease when the Paris City Council enacts and enforces an outright ban on “love locks,” permanently removing the plague from our bridges," they said in an opinion piece for The Local. (see link below)

'Love locks have made Paris a visual cesspool'