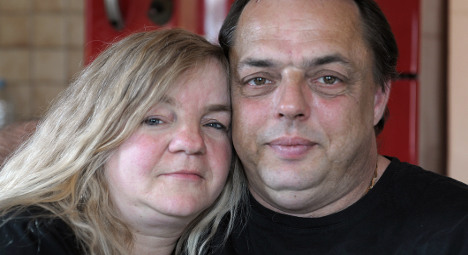 Elisabeth Lorentz (L) and Eric Holder posing a day after they received a letter from the French Presidency. Photo: Frederick Florin/AFP

Eric Holder, 45, and Elisabeth Lorentz, 48, appeared in court in the northeastern city of Metz in a bid to overturn a law stipulating that parents and their children – whether natural or not – cannot marry.

The pair had hoped to wed last year but French president François Hollande was forced to intervene when he wrote to the couple to remind them that it would infact be illegal.

The law states that exceptions to the rule can be made by presidential decree for unions like the one envisaged by Holder and Lorentz, but only if they have the blessing of the person through whom they are linked.

In this case, that would be Holder's father and Lorentz's ex-husband, who is now dead.

The court in Metz will announce its ruling on June 26.

"I hope we can ultimately marry and create a real reconstructed family like thousands of others that exist today," Lorentz said after the hearing.

Lorentz, who married Eric Holder's father in 2003 and divorced him in 2012, said she would take the fight "right up to the European Court of Human Rights if needed" and win her case.

Their lawyer Mathieu Ehrhardt said the French law was flawed, adding that the European Court of Human Rights had rapped Britain in 2005 over a similar case.