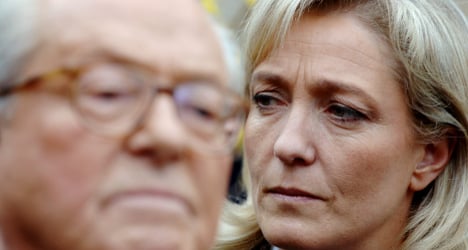 The public battle in France's most famous far right family is set to continue with Jean-Marie Le Pen (left) set to write an open letter to his daughter and party leader Marine (right). Photo: Martin B

The founder and honorary president of the anti-immigration National Front party has shown no signs of ending the public conflict with his daughter that has fascinated political observers in France.

An angry Jean-Marie Le Pen told AFP and French daily Le Monde that on Thursday he’ll publish a letter that demands his blog be given its spot back on the National Front website. The blog was pulled after Le Pen, who has convictions for holocaust denial and hate speech, posted a video in which he appears to make an anti-Semitic pun.

It was the last straw for his daughter Marine Le Pen, who heads the party and has led a successful effort to make it more mainstream. She launched her most public rebuke to date of her father's often provocative words, calling his pun a “political gaffe” and ordered the video’s removal.

"However, Jean-Marie Le Pen said he blamed the National Front leadership for turning the alleged pun into a scandal among groups fighting anti-Semitism.

In his interview with Le Monde and AFP, Jean-Marie reiterated his previous claim his statement had been completely innocent. In the video, Le Pen pledged to strike back at his critics – including Jewish singer Patrick Bruel – using a pun suggesting Nazi gas chambers.

“Must I carve every word before I let it fall?” Le Pen asked. “That’s not my style.”

Le Pen also indicated he was a bit hurt by how he has been treated by his own party.

“I still haven’t been in contact with anybody,” said Le Pen, adding that he wasn’t even told his blog was being pulled. “Nobody has called me, I’ve been here by myself.”

Though Le Pen indicated he would be willing to “propose peace” to his daughter and “restablish the status quo.” However, he noted Marine Le Pen’s response to his letter will “show her aptitude in governing.”

Joel Gombin a far-right expert at the University of Picardie told The Local previously that the pun controversy is just another example of the party using provocation to garner attention.

“There is no real proof that the way he talks is bad for the party,” Gombin told The Local. “Just a few days before the European elections he made these ‘Mr. Ebola’ comments (Le Pen: 'Ebola can solve immigration in Europe'), which were all over the media, and obviously they didn’t harm the party."

The National Front declined to comment when contacted by The Local on Thursday.