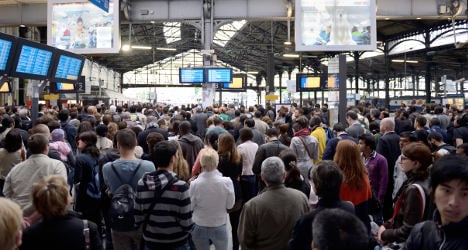 French commuters will face another day of travel chaos after unions voted to extend their strike by a further 24 hours. Photo: Eric Feferberg/AFP

Rail unions turned up the heat on the government on Thursday by extending their strike for a second time.

The industrial action, which began on Tuesday evening and was originally intended to a be 24-hour walk-out, will now continue into a third day on Friday.

The CGT union and Sud-Rail announced their decision on Thursday lunch time after talks with the goverment failed to reach a resolution. However, in the first glimmer of hope for commuters, CGT said it will speak at 9pm about the progress of the negotiations.

"We've just received the latest document from the government. At first glance, this text is largely improved" in comparison to a proposal from the morning, said CGT secretary general Gilbert Garrel. "It's a positive sign."

Rail user groups expressed their dismay at the extension of the strike.

"Conditions are really very bad for commuters, especially in the Paris region. It's abominable."

The unions, who are protesting against planned reforms to the rail system, have called on members to protest outside the Ministry of Transport as well as other locations across France.

"Railway workers, strongly mobilised on this second day of striking, have massively (voted to) continue the movement for 24 hours," the CGT union leading the protest said in a statement on Thursday.

In terms of the impact on commuters French rail chiefs SNCF predicted that the situation on Thursday would be better than on Wednesday but accepted that on average only one in two TGV trains would be running. However the outlook was bleaker for the Paris region, where only one in three trains were running and only the RER A was unaffected by the strike.

France’s transport minister Frederic Cuvillier met with union chiefs on Wednesday night but so far has failed to resolve the dispute.

Talks with Cuvillier took place on Thursday with CGT representatives, but Sud Rail had already walked off, saying the government "refuses to negotiate."

"We have decided to walk away from the table because the minister has still not responded to our demands," Nathalie Bonnet of Sud-Rail, SNCF's third largest union, told reporters.

Commuters will be hoping a solution can be found to avoid any further industrial action which left many facing a second day of travel chaos.

There were reports on Thursday of 355 km of traffic jams around the Paris region as passengers swapped the train for their cars. As seen in the map below, where the red highlights where the log jams were on Thursday morning. Lyon and Marseille were also affected by traffic jams on major arteries arounfd the cities due to the rail strike.

At Lille-Flandres train station in the north of the country protesting rail workers descended on to the tracks to prevent trains from leaving or arriving at the station.

Rail provider SNCF says it is doing everything to alleviate the problems caused by the strike.

“We are doing the maximum to try and increase the number of trains, each time we can, and do whatever we can to inform rail users and give them the means to make arrangements. We know that it’s difficult," said Patrick Ropert, the company's head of communication.

French politicians expressed their anger at the impact the rail strike was having on members of the public. "In a modern society, we must be able to negotiate without taking passengers hostage," said opposition MP Valérie Pécresse.

French rail user groups say passengers are becoming fed up with strikes as well as the state of the French rail service.

"The strikes have very bad consequences for passengers, because there are so many more commuters now than in the past," SOS-Usagers' Delarue told The Local. "Only a minority of people will find sympathy with the strikers and say "well it's their right".

"But travelling conditions for passengers during the strike are really very bad. It's abominable."

The rail strike began on Tuesday evening, but its main impact was felt on Wednesday with train links to other countries also hit.

Wednesday's action coincided with a taxi strike that added to the chaos. Some travellers were forced to walk or even run along roads to get to airports to avoid missing their flights. Cuvillier said on Tuesday the sector's debt stood at more than €40 billion ($54 billion), and would likely soar to €80 billion by 2025 if nothing was done to stem it.