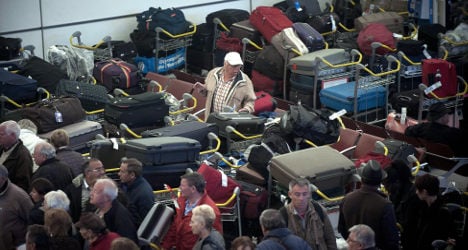 The bad news just keeps on coming for France’s travelling public this week.

Already blighted by taxi driver and rail strikes the French public will see further disruptions to transport at the weekend after Air France ground crews announced they too will walk off the job.

Three unions representing ground crews have said the workers will strike on Sunday in protest at a restructuring plan that has been in place since 2012.

“Management is deaf to our demands because it has been counting on “its double agents” to break the movement,” CAT union officials wrote in a statement. “But the agents are no longer  being taken in, they’re no longer willing to submit to the cuts imposed by management.”

The unions, including FO and Sud Aérien, are acting primarily against Air France’s Transform 2015 plan which the company says is intended to “revive it's competitiveness and profitability.”

For travellers it's just one more obstacle during a week in which they have been forced to deal with major disruptions.

The trouble started on Tuesday when rail workers went on strike. Angry taxi drivers added to the chaos on Wednesday when they too downed tools for the day. Though the cabbies, angry over the competition from ride-sharing services like Uber, went back to work, rail workers have extended their industrial action to Friday evening.

Rail user groups claim the public are being held to ransom by union members.