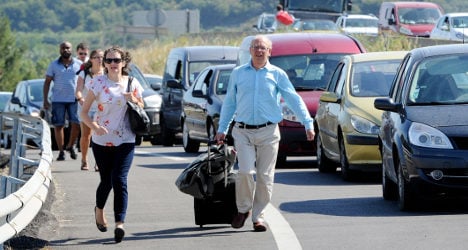 Amid the chaos of duel taxi and train strikes in France, travelers were forced to walk to airports. Photo: Boris Horvat/AFP

CLICK HERE for the latest news on the strike action, which is now set to continue until Friday.

As it happened on Wednesday

French commuters faced further travel chaos on Thursday with a major train strike against proposed reforms to contain the rail sector to extended for a second day. Commuters were also hit by the double whammy of a taxi strike on Wednesday.

Union members voted on Wednesday afternoon to continue their industrial action until Thursday evening. They have also noted the strike is "extendable".

SNCF said at least one out of two trains will be running on Thursday, but travellers are still being advised to find alternative means of transport.

The combination of taxi and rail strike is perhaps hitting no one harder than people trying to reach the airport. On Wednesday afternoon French daily Le Parisien reported people stuck in traffic have exited cars and started walking to Paris and Marseille airports (see photo above) out of fear of missing their flights.

However, the government is sticking to its position the proposed reforms which prompted the strikes are necessary to keep France's train network healthy.

"We are speaking about this in order to reassure everyone," said government spokesman Stephane Le Foll. "Our goal is the continued operation of the SNCF."

Meanwhile, Transport Minister Frédéric Cuvillier said he is "ready to meet with the unions this evening, tonight, any time today. They must be partners in this reform." He is scheduled to with union representatives on Wednesday night about their grievances.

The rail strike began on Tuesday evening, but its main impact was felt on Wednesday with train links to other countries also hit. The state rail operator SNCF said only one high-speed TGV train out of two or three was running and regional trains were also affected.

In the busy Paris region, services were down to a third on average. The affected trains included one running from the suburbs through Paris to the city's Charles de Gaulle airport.

Eurostar trains to and from London were scheduled to run normally, while three out of four Brussels- and Amsterdam-bound Thalys trains will be operational.

Dear France, your stupid strikes are ruining one of your last big industries. Tourism!! Wake up!!

Trains to Germany were unaffected, but only one of two trains to Spain were due to run.

"The number of strikers will be high, notably among ticket collectors and drivers," more than half of whom have said they are prepared to observe the strike, said SNCF human resources director Francois Nogue.

The company advised passengers to put off their travel if possible, and for those travelling in by road to consider car-pooling.

An SNCF official in Paris's Austerlitz station said only 10 trains featured on the arrivals and departures list at 9:00 am (0700 GMT) against around 45 on normal days.

Transport Minister Frederic Cuvillier said Tuesday the sector's debt stood at more than 40 billion euros ($54 billion), and would likely soar to €80 billion by 2025 if nothing was done to stem it.

The problems for commuters were exacerbated by a protest by taxi drivers in several European capitals, including Paris, against what they see as unfair and illegal competition from app-using car services such as Uber which have shaken up the taxi industry.

Hundreds of taxis blocked the entrances and the exits of two main Paris airports – Charles de Gaulle and Orly – before snaking their way towards the city, blocking arterial highways and causing traffic jams.

@TheLocalFrance how can an American trying to get to the airport this morning in #paris do so w/ no public transit? No @Uber available

@TheLocalFrance I'm a novice #American tourist and it's been (and will be) a scary frustration not having a #taxi to rely on.

California-based chauffeur car company Uber is the main target of the drivers' ire, but it is only one of many new smartphone-dependent car services seen as bypassing strict regulations faced by licensed drivers.

In France, there are now an estimated 10,000 vehicles and motorcycle taxis run by such non-traditional firms.

Drivers are only allowed to pick up passengers through prior reservation, not by hailing them in the street. Most notably, these operators do not  have to shell out some 240,000 euros for a licence required by official taxi owners.

In a sign of the anger felt by many taxi drivers there was an altercation between strikers in Paris and the driver of a private hire cab.

"Do you want us to smash in your car," one of the angry protesters said to the private cab driver, Europe1 radio reported. "Don't you know there's a strike. I don't care about your customers."