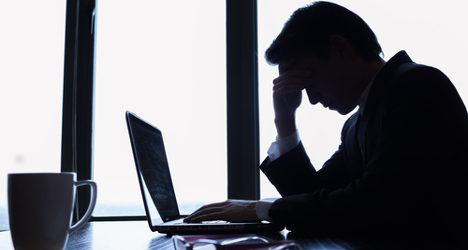 Some days it really is better to stay at home, it seems.

The worker, either out of devotion or fear of losing his job, who comes to the office even when sick or feeling burned out isn’t helping anyone by being there, according to a new study.

In fact their presence is costing French employers up to €25 billion per year in lost productivity, says the study carried out by Midori Consulting, a Paris-based work health and safety outfit.

As part of the phenomenon known as "presenteeism" people come to work even though they are in no condition to contribute, get little done and actually have a negative impact on others.

Either through their own inability to perform, the mistakes they make or conflicts they engage in with others, they end up having a net downward effect on productivity.

“If they have the flu. They infect the others,” Midori principal Matthieu Poirot told The Local. “If they are demoralized, they spread that to others too.”

Based on Poirot’s studies of six companies with a combined total of 6,000 workers, he calculated ‘presenteeism’ costs companies in France six to nine percent of their productivity. In comparison absenteeism took a 4.53 percent bite out of the economy in 2012.

A recent report claimed French public sector workers take an average of nearly a month off beyond annual leave.

According to Poirot’s calculations the money lost to "presenteeism" is between €13.7 and €24.95 billion per year.

While the ongoing economic crisis in France has pushed people to work even harder to keep their jobs, a cultural influence is also at work in presenteeism. Poirot said the French take their work very personally and are emotionally attached to it.

At the same time managers govern with the critical and demanding style that is common in French school, Poirot said. The combustible mix of bosses stingy with praise and workers who take their duties personally has created a toxic situation.

“This is really a vicious cycle,” he said. “It just gets worse.”

There is also a link to France’s fatigue epidemic. About 3.2 million French workers, who put an excessive and even compulsive effort into their jobs, are on the verge of burning out, another study says.

The all-consuming nature of people’s jobs has left them feeling exhausted, emotionally empty and sometimes physically in pain.

“France’s appearance from the outside can be a bit simplified,” Jean-Claude Delgenes, whose firm Technologia authored the study, told The Local previously. “There is a lot of overtime. Most workers don’t adhere strictly to the 35-hour work week.”