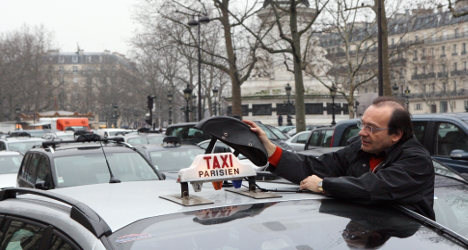 Doube strike. France's taxi drivers will be on strike on Wednesday as well as rail unions. Photo: Patrick Kovarik/AFP

Wednesday could be a miserable day for anyone in France who needs to travel but doesn’t have a car.

With the train network already set for major disruption because of a nationwide strike by rail unions that begins at 7pm on Tuesday, travellers will also be hit by a taxi drivers strike.

Paris’s largest taxi firm G7 has already warned that it won’t be taking reservations on Wednesday. Drivers have been called to protest at Orly airport and at the OrlyVal train station that links the RER to the airport.

In the south of France around 1,000 cabbies are threatening to block the TGV train stations at Marseille and Aix-en-Provence as well as the region’s main airport.

The industrial action by cabbies is part of a European-wide walk-out and is in protest against the rise of private hire car firms like Uber, which allows ordinary car owners to become taxi drivers and use a mobile phone app to calculate fares.

Uber, now worth $18 billion, has gone from strength to strength but its rise has angered traditional taxi firms, who say it is providing unfair competition.

Wednesday’s strike is just the latest industrial action by cabbies in France.

After threats of wildcat strikes the government stepped in and asked a specialist to come up with a plan to defuse the ongoing tension between private hire firms, known as VTCs and tradition taxis. Click on the link below for more details.