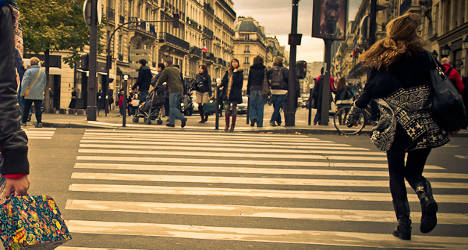 Be careful how you cross the road in France. Police are cracking down on rogue pedestrians. Photo: kimdohac/Flickr

A police crackdown in the city of St Etienne has left local pedestrians walking on eggshells.

On Tuesday officers targeted pedestrians who break the law by crossing the road at red lights, by handing out €4 fines.

The action follows a similar operation in the city on Friday which saw 186 fines handed out in just 45 minutes.

Normally it is pedestrians in France who complain about being the victims of rogue drivers but recent incidents in the city has forced authorities to alter their targets.

After six pedestrians were killed in various accidents in recent months police have decided to make sure locals stick to the rules when crossing the roads.

“In the city centre, where there is a tram, people behave as if there’s no longer any cars. They don’t look when they cross the road,” one police officer told Le Figaro newspaper.

The handing out of fines followed a safety campaign that was launched at the beginning of last week and for some it was important to send the message that the pedestrian is not always king.

“Even when the pedestrian is in the wrong we target the motorist,” lawyer Remy Josseaume told Le Figaro. “And it costs them dear, with a €135 fine and four penalty points handed out.

But not everyone agreed with the action.

“Prevention is going in the right direction but repression is not helpful,” Adrien Weil, a law expert in the field of motoring told Le Figaro.