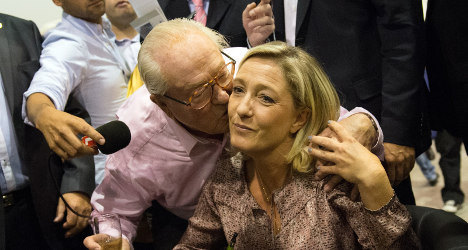 Jean-Marie Le Pen is used to being lambasted for the anti-Semitic or xenophobic statements he’s made throughout his decades in political life, but he’s not used to being rebuked by his own people, let alone members of his own family.

Yet that’s what happened last week when his daughter Marine Le Pen, who heads the National Front party he founded, publicly criticised him for an apparent anti-Semitic pun he made in a video on the party’s website.

In addition to calling the statement a “political gaffe” the younger Le Pen ordered the offending clip to be pulled from the web,

Following her criticism, news also broke on Tuesday that Jean-Marie's blog, which published the video that prompted the uproar, will now no longer be featured on the National Front's website. That move that apparently led her father to claiming he had been "stabbed in the back".

"I can take direct hits to the face but not cowardly ones in the back,"  Le Pen senior said.

In recent years Marine Le Pen has successfully pursued a strategy of trying to make the anti-immigration party more palatable to mainstream voters, although during that time she has frequently defended her father against so-called ‘false controversies'.

She's done so even though her father has racked up a string of convictions for inciting racial hatred and denying the Holocaust.

Her decision to publicly rebuke her father's latest offensive remark has raised the question of whether she is laying the groundwork to finally oust her troublemaking father from the party in an effort to further her mainstream political objectives, including a potential run at the presidency in 2017. While that may seem a wise move to most onlookers of French politics, experts say it is unlikely to happen.

Joel Gombin a far-right expert at the University of Picardie told The Local there is no sea change afoot in the National Front, rather the pun controversy is just another example of the party using provocation to garner attention.

He says the pun was an effort by the aging, but not retired Jean-Marie Le Pen to flex his muscles and interfere with his daughter’s ambitions to multiply her power in Europe and more to the point Gombin believes there’s no real advantage for Marine Le Pen ditch her father.

“There is no real proof that the way he talks is bad for the party,” Gombin told The Local. “Just a few days before the European elections he made these ‘Mr. Ebola’ comments (Le Pen: 'Ebola can solve immigration in Europe'), which were all over the media, and obviously they didn’t harm the party.

“(Marine Le Pen) only criticized [the anti-Semitic pun] from a political point of view. She didn’t criticize him for what he said,” Gombin said. “She actually said he didn’t mean it and it was only the media interpretation that it was anti-Semitic.”

The expert says that as Marine Le Pen continues her campaign to build broad popular support for the party, her father serves as a contrasting influence that can show her to be more moderate, at least in comparison.

The 85-year-old still plays a "balancing" role between different factions within the party, and also panders to more conservative supporters who may not be happy with his daughter's more mainstream approach, Gombin said.

Jean-Marie Le Pen's inflammatory comments also aid his daughter by bolstering the narrative put forward in the media that she has "de-demonized" her party, Gombin believes.

In a France populated by voters outraged by a failing economy and scandal-prone politicians from the two mainstream parties, the "good cop, bad cop" routine is clearly working with the party recently topping the vote in last month's European Elections.

But despite that historic victory there's no doubt Jean-Marie Le Pen's continued presence in the National Front party is still causing problems for his daughter.

Marine Le Pen has been trying to pull together a powerful voting bloc of MEPs from seven nations, but her bid was hampered after Britain's UKIP rejected her advances, with its party leader Nigel Farage blasting the “prejudice and anti-Semitism” present in Le Pen’s party.

But despite the obvious hindrance Jean-Yves Camus, a political analyst at France's Institute of International and Strategic Relations (IRIS), believes Marine Le Pen is unlikely to get rid of her dad because he is simply too popular to be cast aside.

“The position Jean-Marie Le Pen holds in the party leadership, his popularity among the activists and the existence of a personal rapport and not only a political one between him and the president of the National Front make things complicated,” Camus told Europe 1 radio.

Other experts however, suggest that while this week's public spat may not be a sign that Le Pen the elder is about to be publically dumped, it was a clear symbol of the shifting sands as power moves from father to daughter.

Nicolas Lebourg, a far-right historian, told AFP this case was "the first time that they (FN members) all go as far" in condemning him.

"The father doesn't have his own party anymore, there has been a renewal of activists. And with its 25 percent in the European elections, Marine Le Pen's line has shown its superiority," he said.