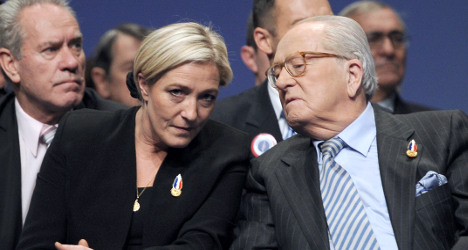 Marine Le Pen and her father Jean-Marie have become involved in a public war of words that threatens party unity. Photo: Miguel Medina/AFP

The crisis kicked off last week when a video was posted on the National Front (FN) website in which Le Pen made an apparent anti-Semitic pun – the latest in a series of controversial statements by the 85-year-old who has had multiple convictions for inciting racial hatred and denying crimes against humanity.

As in previous instances, anti-racism campaigners were quick to condemn the remark. But this time, members of the FN itself also rose up in anger, including Le Pen's daughter Marine, who took over the party leadership in 2011.

She has since sought to rid the National Front of its reputation for racism and anti-Semitism in a move known as the "de-demonisation" of the party.

And judging by the FN's triumph in European Parliament elections last month – when the party came first in France with 25 percent of the vote – as well as its success in local polls in March, this strategy appears to be working.

Marine Le Pen's next challenge is to form and take command of a far-right grouping of parties in the European Parliament.

She has so far secured the backing of Belgium's far-right Vlaams Belang (VB), the Dutch Party for Freedom (PVV), the Freedom Party of Austria (FPO) and Italy's Lega Nord, but is still short of the seven-nation representation required under EU rules to be considered a group.

While also opposed to the European Union, other far-rightists – including the UK Independence Party, which topped European elections in Britain – are wary of a party they associate with anti-Semitism, and Jean-Marie Le Pen's latest comment is unlikely to help.

In the video, Le Pen pledged to put his critics in their place — including French singer Patrick Bruel, who is Jewish — using a pun suggesting Nazi gas chambers.

FN vice president Louis Aliot, who is also Marine Le Pen's boyfriend, criticised it as "a bad phrase. It is politically stupid and dismaying."

Marine Le Pen herself hit back and described the remark as a "political error", the first time that she has made a direct criticism of her father in public.

Her father wasted no time in responding, telling RMC radio on Monday morning that the only "political error" was to fall into just "one way of thinking."

The FN founder has come out with a series of controversial comments over the years, such as saying that the gas chambers in World War II were a "detail of history" or more recently that the Ebola virus could address Europe's immigration issues.

But Nicolas Lebourg, a far-right historian, said it was "the first time that they (FN members) all go as far" in condemning him.

"The father doesn't have his own party anymore, there has been a renewal of activists. And with its 25 percent in the European elections, Marine Le Pen's line has shown its superiority," he said.

Joel Gombin, a French far-right expert, added that "the stands taken by Aliot and Marine Le Pen to distance themselves in a fairly clear manner from Jean-Marie Le Pen… are also an effort to salvage things at the European parliament."

Nevertheless, he said Le Pen senior was unlikely to go any time soon.

The 85-year-old still plays a "balancing" role between different factions within the party, and also panders to more conservative supporters who may not be happy with his daughter's more mainstream approach, Gombin said.

The FN founder's controversial comments also profit his daughter, as they "feed the media narrative of 'de-demonisation'", he added.

Ultimately, "it's not a political issue, it's a human issue… It's not conceivable that Marine Le Pen would push him out of the party."